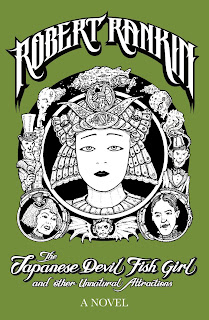 Robert Rankin's Far-Fetched-Fictional Steampunk sequel to THE WAR OF THE WORLDS!
The pickled Martian s tentacles are fraying at the ends and Professor Coffin s Most Meritorious Unnatural Attraction is no longer drawing the crowds. It s 1895; nearly a decade since Mars invaded Earth, chronicled by H.G Wells in The War of the Worlds. Wrecked Martian spaceships, back-engineered by Charles Babbage and Nikola Tesla, have carried the Queen s Own Electric Fusiliers to the red planet and Mars is now part of the ever-expanding British Empire. Coffin needs a sensational new attraction. Word has reached him of the Japanese Devil Fish Girl; nothing quite like her has ever existed before. But Professor Coffin s quest to possess the ultimate showman s exhibit is about to cause considerable friction amongst the folk of other planets. Friction sufficient to spark off Worlds War Two.

Robert Rankin is an unrepentant Luddite who writes his bestselling novels by hand in exercise books. He lives with his wife in Brighton.

While I’ve heard the title of many of Robert Rankin’s 32 published books before, I have never actually picked one up and read it, until this latest publication. My favorite author is Terry Pratchett, so I enjoy a good humorous tale, but have been reluctant to give either Rankin or Tom Holt a go just in case I was disappointed.
This book is set in the late Victorian times but with many futuristic elements, such as spaceships and other sci-fi contraptions. The story is also loosely based around HG Wells War of The Worlds, which was blended into Rankin’s own story with great expertise.

The plot revolves around a curiosity show assistant called George Fox who, with the help of his supervisor Professor Coffin, goes on a quest to find the holy grail of attractions: the Japanese Devil Fish Girl of the title. Along the way, they encounter Martians in the H.G. Wells style, famous showman P.T. Barnum and programming prodigy Ada Lovelace (the daughter of Lord Byron; she receives an inexplicable age-down here so that she can be a love interest for the main character).

While the story did flow along quickly, I felt that there were some areas that could have been expanded upon to make the overall tale a bit tighter. That being said, The Japanese Fish did convince me enough about Rankin’s style to pursue reading some of his previous work.
Posted by Scott Wilson at 7:23 PM