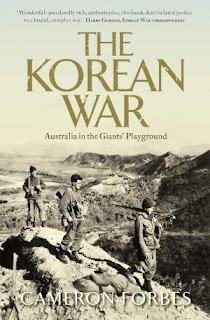 The Korean War by Cameron Forbes

The Korean War was a 20th Century conflict that has never ended. South Korea, a powerhouse economy and dynamic democracy sits uneasily alongside North Korea, the world's most secretive, belligerent, unpredictable and repressive totalitarian state. Today, tensions simmer and occasionally flare into outright violence on a peninsula dense with arms, munitions and nuclear warheads.

Cameron Forbes, acclaimed author of Hellfire, tells the story of the war and Australia's involvement in it in a riveting narrative. From the letters and diaries of those diggers who fought across Korea's unforgiving hills and mountains to the grand strategies formulated in Washington, Moscow and Beijing, The Korean War reveals the conflict on all its levels – human, military and geopolitical. In the tradition of Les Carlyon's Gallipoli and The Great War and Paul Ham's Vietnam, Cameron Forbes has written a masterpiece that will serve as the definitive history of Australia and the Korean War.

Cameron Forbes was born in Rockhampton, Queensland. He has been foreign editor of The Age, European and Asia correspondent for The Age and Washington correspondent for The Australian. He has reported wars and civil wars in the Middle East, Rwanda, Afghanistan and Bougainville. He has spent much time in that fascinating foreign country, Aboriginal Australia. He has received the Graham Perkin Journalist of the Year Award, the Canadian Award for Journalist Merit and the United Nations Association Media Peace Award.

The Korean was is one that many Australians don’t’ realise the country took a part in. We often hear about other wars, such as Vietnam that many Diggers lost their lives in, but what about the Korean War? We still lost 340 soldiers in this battle at Kapyong and Maryang San. Incidents such as the battle of Kapyong where the US Air force killed 32 Diggers by accidentally bombing them with napalm.

Cameron Forbes writes a very thorough account of Australia’s forgotten part the Korean War in a very vivid and detailed manner. Having come from a long and successful career as a journalist with The Australian and The Age newspapers, Forbes’ craft is well and truly honed. Many chapters of the book contain anecdotes and historical accounts of events that should be taught to students as part of Australian history.

This book is a real eye opener to the losses that diggers suffered in the 50’s and as part of another failed campaign that the allied forces took part in over the century.

Definitely worth a read for the historical account of part of the countries armed services and dedication to fighting for the freedom of all.
Posted by Scott Wilson at 9:14 PM