Book Review: Why Are You So Fat?: The TalkSPORT Book of Cricket's Best Ever Sledges by Gershon Portnoi 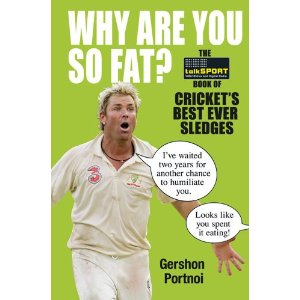 Product Description
When hefty Zimbabwean chicken farmer Eddo Brandes kept on playing and missing to an increasingly frustrated Glenn McGrath, the Australian had had enough and decided a bit of verbals were called for: 'Oi, Brandes, why the hell are you so fat?' Quick as a flash, the answer came back: 'Because every time I shag your missus, she gives me a biscuit.' Few games have such a rich history of sledging as cricket, with the Australians famed masters of the art. This collection, featuring contributions from talkSPORT's own Darren Gough and Ronnie Irani as well as many other cricket stars, brings together the best examples from around the world. To be effective, sometimes the sledge can be funny, as when Andrew Flintoff urged Tino Best, who was struggling to lay a bat on the ball, to 'mind the windows' at Lord's. Best immediately charged down the pitch to attack Ashley Giles' next ball and was stumped. But sometimes an element of real menace can do the trick, as when Malcolm Marshall commented to a struggling David Boon: 'Now are you going to get out or am I going to have to bowl round the wicket and kill you?'

Review
Why are you so fat? Is one funny book. The light-hearted banter that goes one amongst the rival cricket teams is split up by chapter in this book. Most of the payouts and sarcastic comments seemed to be good natured, but there were some cricketers who displayed a total unsportsmanlike nature in their comments that pushed the boundaries too far and became nothing but low, personal attacks. There was one of the Australians, who I won’t mention, that seemed to be able to dish out quite personal comments but couldn’t take even the smallest sledge back.
I found the concept of this book to be very interesting. Who’d think that there was such rivalry between people who are supposed to be sportspeople? Having never been to a cricket match and only seeing the games on the television, I found the chapter of crowd sledging quite interesting, such as the mockery of Ronnie Irani when he warmed up on the out fields.
There is some downright funny banter in this book as well as some pretty nasty ones. Worth a read for both cricket and non-cricket fans.
Posted by Scott Wilson at 9:32 PM