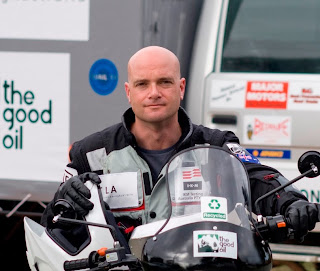 Scott: Thank you very much for taking time out of your busy schedule to have a chat to us at The Fringe Magazine about you latest book and writing in general. I’ve just finished reading Is That Thing Diesel? and thoroughly enjoyed it.

Paul: Cheers Scott, it should have been pop up & scratch-n-sniff for the road trains and road kill in central Queensland.

Scott: How hard was it getting your first book published and what would you do differently, if anything if you had the chance again?

Paul: Book one was a series of bizarre circumstances that started with me failing a psychological test for an offshore contract that was being tendered in Northern Russia. As a result I had to write a report on why I failed, that turned into a 5000 word essay on what’s wrong with the oilfield. I passed, got the gig, and a year later I sent my report to a friend in Sydney just for a laugh as he knows me well, and knows I’m completely mental anyway. He then sent it to a friend of his who works in publishing, they contacted me and asked if I would be interested in putting a book together, bizarre I know.

Scott: What was the most exciting or interesting thing that occurred during your ride around Australia when you wrote this book?

Paul: Bullo River Station, because I had never had the opportunity to see a real functioning cattle station, I found everything about the place fascinating.

Scott: So how much of Is That Thing Diesel? did you write on the road, and how much did that change when you got back home and revised your manuscript?

Paul: My initial intentions where to write as I travelled via my laptop, however after the first day my hands where so sore from the vibrations I realised I couldn’t. The bike was so bad in fact that after the first month I had trouble using a pen, eating, I ended up with residual nerve damage in both hands that lasted for months. So I used a Dictaphone and worked of the tapes after I got home.

Scott: So what’s your favourite type of music to listen to? Favourite musical artists? Do you listen to music while you’re writing?

Paul: All kinds of stuff! The last album I purchased was Ry Cooder ‘Mambo Sinuendo’ I do listen to music when I write, I leave it on random tunes including The Jam, Stranglers, The Foo, Pink Floyd, Nightmares On Wax, John Lee Hooker, Tame Impala, ELO, The Police, Single Gun Theory.

Scott: What is a typical day of writing for you? Do you try and achieve a set number of pages or words and how many hours would you spend on a normal day or writing?

Paul: Twice a day, mid morning for two or three hours, then again at night from 8pm onwards, sometimes all night. I have a child under five so that’s when I can get on with it uninterrupted. No set amount of words or pages, sometimes I spend the morning session reading what I did the night before, then end up deleting the whole lot and starting again.

Scott: Who are your five favourite authors?