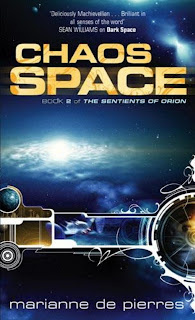 The second installment in a compelling new space opera series from the acclaimed Australian author of the Parrish Plessis books.
Having fled the invasion on Araldis, Mira Fedor travels to the nearest Orion League planet seeking aid for her devastated world, but the authorities seem more interested in stealing her bio-ship, Insignia, than in rendering help. While Mira flees from world to world, Araldis burns.The more Mira uncovers, the more mysteries she finds: why is the initiate Tekton taking such extreme measures just to acquire a mineral alloy? Why do so many of the protagonists in this galaxy-wide drama have links to the Stain Wars? And what part does the Sole Entity - literally, God - have to play . . . ?

Marianne de Pierres is the author of the acclaimed Parrish Plessis and Sentients of Orion science fiction series. The Parrish Plessis series has been translated into eight languages and adapted into a roleplaying game. Marianne is an active supporter of genre fiction and has mentored many writers. She lives in Brisbane, Australia, with her husband, three sons and three galahs.

Part two of the Sentients of Orion series start off pretty much where book one finished off. Again, de Pierre’s develops her characters in a way that elude many sci-fi authors. While some critics think this is detrimental in a sci-fi series, I see it as one of the strengths that de Pierre’s has to draw the reader into the story and creates an empathy with the characters.

This second novel is Space Opera at its best. The complexity of the sub plots intertwining throughout the course of the novel creates an exciting and well paces storyline that keeps the reader thinking.

Mira Fedor, the heroine from the first book is still travelling the galaxy in search of aid for her home world. As with any great story, this is the cause of endless conflict and hostility for the main character, for whom, nothing ever seems to go easy.

Chaos Space spends a bit of time setting the scene for the big finale in the final novel, so does suffer a bit at this expense. If read immediately after Dark Space and right before Mirror Space, this element can easily be overlooked. I would actually like to see this trilogy in an omnibus so that the reader would appreciate the story better.

This book is full of the wit and action that we’ve come to expect from de Pierre’s and is definitely worth reading.
Posted by Scott Wilson at 4:55 PM