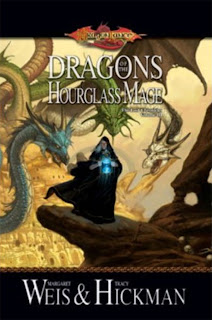 DRAGONS OF THE HOURGLASS MAGE
by Margaret Weis and Tracy Hickman
ISBN: 9780786949168
Format:Hardback
Imprint:Wizards of the Coast
Published:02/11/09
Subject:Science Fiction

Between Chronicles and Legends, what made Raistlin aspire to godhood?
DESCRIPTION OF BOOK
In the concluding volume of this trilogy, the reader finds out what, exactly, Raistlin did after he abandoned the Companions to their deaths in the War of the Lance. Dragons of Spring Dawning shows Raistlin concluding a deal with the mysterious Fistandantilus, and the Legends trilogy shows what he did with that alliance, but until now there has been no explanation of what came between the War of the Lance and the Dwarfgate Wars. What power made Raistlin the Master of the Past and Present and allowed him into the Tower of High Sorcery - and a place in history as he pursued a place in the cosmos as a god.
Review
It is a tribute to the writing and vivid character development of Weiss and Hickman that the main character in this book was created by them over twenty years ago. Raistlin first made his appearance to Dungeons and Dragons fans over two decades ago and has remained on of the favourites in the Dragonlance series ever since.

This is a book for diehard fans of the Dragonlance series, especially those that love the character, Raistlin. It's also one for those that just want to know what happens behind the scenes before Takhisis's entry. Weis and Hickman have done a great job with Dragons of the Hourglass Mage in this 300 page book that details the mage's rise to power as well as his machinations and schemes. Readers of the series will be happy to see cameos and lead roles by; Kitiara, Lord Soth, the Innfellows, Par-Salian, LaDonna, Justarius, and more of the old favourites. In fact some of the characters that first appeared in Highlord Skies return - most prominently, the witch Iolanthe. I was pleasantly surprised by the narrative in this book because the first half of it felt like the sequel to Highlord Skies. Much of the story weaves in and out of Spring Dawning.

The balance of narrative to dialogue is extremely good, neither one overwhelming the other. The descriptive passages are among the best that Weis and Hickman have done, and the dialogue is excellent. The story itself is notable for what Raistlin is capable of without even using his magical abilities and spells. His character is often seen gathering intelligence and playing one adversary against another to save himself the trouble of dealing with them himself.
Posted by Scott Wilson at 1:49 AM