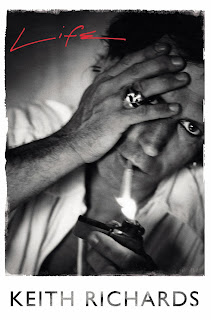 Life by Keith Richards
W & N Non Fiction
9780297854395
$49.99
Hardback
November 2010
608 pages
Biography: Arts & Entertainment
An international publishing event - one of the very few rock memoirs ever to have been published by a living legend.

With the Rolling Stones, Keith Richards created the riffs, the lyrics and the songs that roused the world, and over four decades he lived the original rock and roll life: taking the chances he wanted, speaking his mind, and making it all work in a way that no one before him had ever done. Now, at last, the man himself tells us the story of life in the crossfire hurricane. And what a life. Creating immortal riffs such as the ones in 'Jumpin' Jack Flash' and 'Street Fighting Man' and 'Honky Tonk Women'. Falling in love with Anita Pallenberg and the death of Brian Jones. Marriage, family and the road that goes on forever.In a voice that is uniquely and intimately his own, with the disarming honesty that has always been his trademark, Keith Richards brings us the essential life story of our times.

Born in Dartford in Kent in December 1943, Keith Richards continues to compose, play songs and tour with the Rolling Stones.

Any fan of the Rolling Stones and, in particular, Keith Richards will have to invest in this autobiography. Keith has become an icon to a new generation thanks to Johnny Depp’s modelling of hi the Pirates of the Caribbean character, Jack Sparrow on this Rock Legend. To make this autobiography even more exciting, the audio version of it will be narrated by both Keith and Johnny; can’t wait for that.

Richards’s autobiography covers the full gamut, from his childhood to the present time in this massive tome of his life. It is amazing to see how much society has changed over the course of Richard’s life, from where the Stones were regarded as outlaws and misfits, to where the British PM writes a get well letter to Keith after an accident. There aren’t too many extremes in culture these days, so it can be a bit hard to fully appreciate just how much Keith and the boys were shunned by the establishment back in the day.

The book is written in true Richard’s style, totally no holds barred or prisoners taken. Extreme and unforgiving in its approach and presentation. It was great to read about this Rock Legend’s life in this own words; everyone has heard something about this icon at some point in their life, whether it be about his guitar style, his excessive drug taking habit or influence upon culture from his time with the Stones.

It is quite hard to understand how Richard’s can remember so much of his past considering how much he abused his mind and body over the decades with cocaine and drinking. Lucky for the reader, Richard’s seems to have been able to hang onto these fantastic stories somehow.

It is good to see a Rock Legend admit to the lifestyle he lived without playing on the usual cheap emotions of how repentant they were for how they did things. Richards tells us what he did and doesn’t apologise at all. A good account of both the ups and downs of the decadent lifestyle of a true rock legend.
Posted by Scott Wilson at 5:46 PM