Book Review: Casper the Commuting Cat The True Story of the Cat who Rode the Bus and Stole our Hearts By Susan Finden 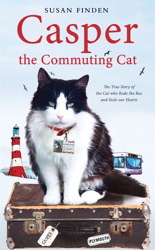 Casper became a national celebrity when newspapers ran the story of the amazing cat that regularly took the No. 3 bus on 11-mile journeys around his home town, Plymouth, in Devon. While his devoted owner, Susan Finden, had wondered where her elusive pet was disappearing to each day, Casper was brightening the lives of countless commuters as they went about their business. Bus drivers, too, were getting well-acquainted with Casper, and notices went up in their depot alerting staff that a very special passenger might board their vehicle. In fact, he became a mascot for the bus company, and pictures of him and Susan adorned No. 3 buses.

When Casper was sadly killed by a car in early 2010 messages of sympathy flooded in from places as far a field as Australia and Argentina. It quickly became clear that Casper and his remarkable story had touched the lives of so many people around the world.

Movingly told by the owner who loved him dearly, Casper the Commuting Cat is the touching story of a very special black-and-white cat that rode the bus and stole our hearts.

This book is a truly touching and unique tale of truth mixed with fiction. The story of Casper, the cat who travelled on the No. 3 bus around his home town. The book is written in two distinct narratives, one from Casper’s point of view and the other from his owner’s, Susan.

Casper's tale is well written and told with honesty and love by his owner Susan, a woman clearly with a heart of gold, who weaves a wonderful story of a truly wonderful cat.

Casper was abandoned and later adopted by Susan, who quickly discovered that he was a unique and colorful cat with a love for adventure. While he always came home to Susan, he loved sightseeing or visiting various locals. He became quite a worldwide celebrity once word got around about his daily travels Susan also gives us a few chapters from Casper's point of view, which I'm sure most cat owners will identify with when they try and work out what their cat is thinking.

Dotted throughout the book are chapters narrated by Casper. These are great and contained various humours advice by Casper to other cats on how to get out of the house without their 'person' noticing.

This is a very light-hearted book that is both humorous and tragic with Casper’s untimely demise earlier this year.
Posted by Scott Wilson at 6:56 PM