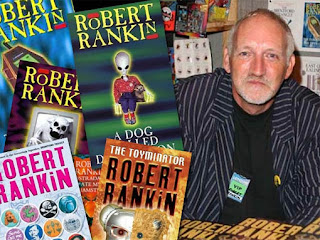 Scott: Thank you so much taking the time to chat with us here at The Fringe magazine. Can you tell us who your favourite character from any of your books?


Robert: With each book you write you meet new characters and you are concentrating completely on them. I have just finished writing my second book in the Steampunk Trilogy, it is called THE MECHANICAL MESSIAH AND OTHER MARVELS OF THE MODERN AGE, and is set in 1897 and my favourite character (who will be the star of the concluding book is Darwin the monkey butler.

Scott: With a writing career focusing on satirical science fiction/fantasy, have you ever written in another genre or style?

Robert: No, I can only do Robert Rankin books the way Robert Rankin writes them. I hoped that my books would be unlike anyone else's. I think I succeeded in that, but I can't write any other way.

Robert: I would hope to do 4000 words a day. In two sittings on starting at about 7.30 AM, the second at 3PM at the pub. Combining business and pleasure, as it were.

Scott: A lot of your books are recorded as Audio Books, how did that originally come about?

Robert: I didn't really know anything about audio books, but one day one of mine arrived in the post, I thought it was a video. trouble was it was read by some very well spoken chap and did not sound like my book at all. So I phoned the company and asked whether I could read them. They were a bit shocked, they said that didn't happen very often, but yes. Thing is it might not have been a good idea, if you have a famous actor reading the books you probably sell more. That is probably the case as no one has asked me to do another one in years. Mind you they are too damned expensive.

Scott: How much involvement do you have in the covers of your books and is there anything you would change about previous editions?

Robert: I have done my own covers for about 15 years now, they were sculptures. I have just started doing illustrated ones, it is 30 years now since I left art school and I finally got a good illustration job. I didn't think it would take THAT long!!

Scott: What are you reading at the moment and who are your favourite authors?

Robert: The Fortean Times, I have read every issue, my favourite magazine on Earth. I haven't read any fiction in 30 years, I didn't want to ever be accused of ripping off some contemporary. It's easy to do.

Robert: Don't do it. You have to get an agent interested in your work then they will sell it for you. Once they have got you a good deal for the first book, sack the swine!!

Scott: Do you have a passion for short stories and have you had many published, and if so, what market did you send them to?

Robert: There are many many stories within stories in my books. It is how I started, I would write them at the place I worked and my friend Nick would read them out in the pub we went to each week. the ones that made us both laugh I kept. They and the poems I wrote then got filtered into many books over the years.

Thank you, I am SO looking forward to Australia, I am sure it will be a journey

of a lifetime.
Posted by Scott Wilson at 2:04 AM