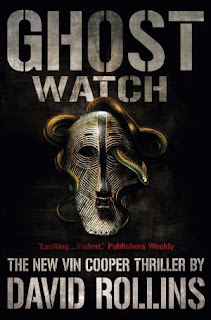 But when his principal is killed in a suicide bomb attack, Cooper is reassigned to a cushy job nursing a couple of needy African-American entertainers putting on a show for US military advisors at a secret base in Rwanda.
Or so he thinks.

Things go horribly wrong when their United Nations chopper is forced down in the Democratic Republic of Congo in the middle of an all-out firefight by opposing forces. The nightmare only intensifies when some of Cooper's people, including one of the entertainers, are captured.

While risking his life to rescue his principals, Cooper spies a US DoD advisor in the enemy encampment, which is awash with American weaponry. It seems that their forced landing in this inhospitable place was no accident...

David Rollins is the bestselling author of Rogue Element, Sword of Allah, The Zero Option and, featuring Vin Cooper, The Death Trust, A Knife Edge and Hard Rain

David Rollins is another author whom I’ve not read before this latest book, Death Watch. This is also the fourth novel in the series containing the character Vin Cooper. Cooper is a typical macho, rough and tough Major in the Air Force, and also an Officer of Special Investigation (like the police for the Air Force). This book is written in a style that fans of Tom Clancy would appreciate, and I couldn’t help but compare the two authors and their style of writing and character development. Cooper also reminded me of the type of character that Arnold Swazzernager would play, with his tough guy image and one liner retorts.

Lots of fast paced action and seemingly inescapable situations that the hero manages to find a way out of, while still protecting his companions. The story is set in the Congo, where Cooper’s character find’s himself stranded with some entertainers on their way to entertain the troops in Rwanda. To make matters worse there is a local war over the mining sites close to where Cooper crashes.

Without giving away any of the plot, this is just the start of the problems.
If you like the stereotypical macho solider based book then this one’s for you.
Posted by Scott Wilson at 8:57 PM