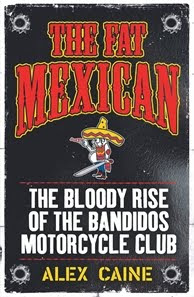 AUD $35.00 inc. GST
The compelling story of the rise and rule of one of the world's most feared outlaw motorcycle gangs - in the bestselling tradition of Dead Man Running and The Brotherhoods.

Having infiltrated the Bandidos for three years in a landmark police operation, Alex Caine is uniquely positioned to tell the untold story of the Hells Angels fiercest rivals, the Bandidos.

Started in the mid-sixties by a group of Texas malcontents and ex-military who idolized the Hells Angels, the Bandidos now operate in almost every country of the world and are especially potent in Europe, Australia, the US and Canada. The Fat Mexican unearths the violent criminal history of the Bandidos: their four-decades-old battle with the Hells Angels, the terror their global expansion has caused rivals and innocents alike and the internal politics and rivalries that drive them to this day.

'Chilling and gritty.' - Publishers Weekly
'A remarkable story.' - Ottawa Citizen
'From start to finish [Caine's] story is a compelling one. His powerful account of the years he spent infiltrating these
extremely dangerous organizations is a fascinating study.' - The Vancouver Courier

Alex Caine has retired from his career as a contracted agent, infiltrating criminal and terrorist organisations on behalf of police forces in Canada and abroad. He acts as a consultant in high-level cases and provides the media with background information on biker investigations. The international sensation Befriend and Betray was Caine's first book.

Caine smacks the reader across the face from the first page then continues to stomp on his head for the rest of the book. This is a very powerful account of the seedy underworld of the outlaw biker gangs. It is another book that really opens the eyes of the readers into a world that they could not possibly know existed, even with the stuff splattered across the news and newspapers.

It is amazing that an undercover police officer can infiltrate such and underground organisation and be part of it for years without being found out. Even more amazing is that one of the officers involved in the operation can write such a detailed account of the gang and still be walking around with all limbs in tact. With the accounts of the violent competition between the Bandidos and Hells Angels, and the subsequent reign of terror against rivals and the general public, I am surprised that Caine has survived.

Anyway, this is well worth the read if you are curious about the sort of life a biker can expect when part of such a motorcycle club.
Posted by Scott Wilson at 7:08 PM