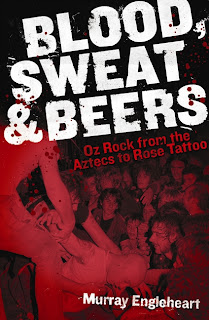 It all began in the late 1960s when Lobby Loyde was blowing up amplifiers on such a regular basis that equipment had to be specially constructed. King of the Sunbury festivals, former child star Billy Thorpe then took massive amplification to another level, making history along the way when his band the Aztecs pulled as many as 300,000 people to the Myer Music Bowl in Melbourne.

Rose Tattoo somehow cranked everything up even higher and became the loudest, most threatening band to ever stalk the earth. Banned from TV show Countdown, they often played in prisons and occasionally had to fight, microphone stands in hand, to get out of the very venues they′d performed in. Then, of course, there were The Angels, Australia′s number-one live drawcard, who turned venues across the country into jam-packed rallies.

Featuring interviews with all the major Australian players and international heavyweights, Murray Engleheart hands out the earplugs and the morning-after aspirin on a tour through the bar-brawling, riot-inducing and occasionally gun-toting Oz rock culture.

One of the most respected rock journalists in the country, Murray Engleheart has written for countless magazines all over the world for three decades. He is also the co-author of the bestselling AC/DC: MAXIMUM ROCK AND ROLL.

Murray Engleheart wrote a brilliant biography of AC/DC back in 2007 and follows up with a great story of the overall culture of rock and roll in Australia. Blood, Sweat and Beers goes straight to the source with dozens of interviews with the main names in the industry over the years. Let me start off by stating that this book only covers The Angels, Rose Tattoo, The Aztecs and X. You won’t find any lengthy mention of other Oz Rockers such as INXS or Skyhooks. If you go into this book realising that is who it’s about, you’ll love it.

Having been a fan of Aussie Rock and Roll for twenty or so years, I found Engleheart’s behind the scenes look into the industry and bands to be very comprehensive and worth reading. The stories of what these crazy rockers get up to behind the scenes is far worse that what the general public sees in the news.

With 16 pages of photos to showcase the Angels, Rose Tattoo and X, this is a great history of the main iconic bands of Oz Rock. There are a lot of bands that aren’t mentioned in the tome, and perhaps the title may mislead a few into thinking that it does cover every Rock band in the history of Australia, (the only complaint I’ve got about the book).
Posted by Scott Wilson at 12:06 AM