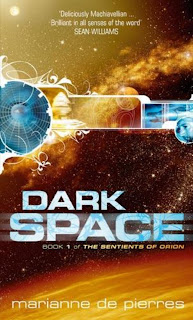 A compelling new Space Opera series from the acclaimed Australian author of the Parrish Plessis books
While drifting in space, lost, due to navigational failure, a mineral scout discovers God. When word gets out, academics from the studiums across Orion scramble to gain the Entity's favor. However, not all the sentients of Orion hold this 'god' in awe - some, like the philosophers of Scolar and the Transhuman's of Extropy are deeply suspicious. Onto the grand stage of inter-planetary academic politics, intellectual conceit and dubious theology walks Baronessa Mira Fedor. Her planet has been torn apart by the invasion of a race of giant tardigrades. Only the Orion League of Sentient Species can lend aid, but OLOSS are preoccupied with communicating with god. Mira, together with the larrikin, misogynist Jo-Jo Rasterovich, is left to her own resources to find help. In doing so she unmasks a galaxy-size intrigue. But will she live long enough to tell anyone...?
Review
Marianne de Pierres is one of the best sci-fi, urban fantasy authors I have come across. De Pierre’s writing is very accessible and makes reading an enjoyable and extremely entertaining read for audiences of all ages, from YA to adults. If you have never read any of de Pierre’s books, this would be a great series to begin with; although the Parrish Plessis books are definitely brilliant novels that I am surprised haven’t been made into big budget movies yet.
Dark Space is the first in a Space Opera trilogy that opens with a humble beginning, and an unassuming character of a drunken fool of a pilot. The pilot discovers what many people spend their entire lives looking for; a divine entity, or God. This entity has been trying to communicate with humans but can’t seem to achieve it.
As with previous de Pierre’s novels, there are a number of stories within the main story that are intertwined and come together throughout the course of the novel.

The first sub plot is about Mira, a young woman who has inherited the "pilot gene" and will soon merge with the "biozoon" of a star ship. But she is a woman, and the society believes only men should have this talent.

The second sub story is of the young heir who was to receive her talent and the dramas that go along with this.

The final sub story revolves around trainees who are trying to work out how to communicate with the entity on behalf of humanity. Can’t wait to see where this leads mankind as it always seems that the people chosen for this sort of task are never the right ones.
Posted by Scott Wilson at 4:41 PM