Book Review: Strange Things Happen A Life with The Police, Polo, and Pygmies By Stewart Copeland 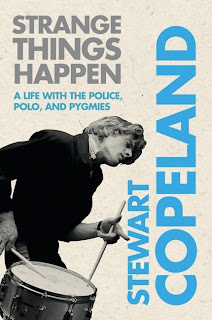 “An often hilarious, always candid and astutely observed memoir chronicling a life observed, largely, from the vantage point of a drum throne.”

Rock legend Stewart Copeland, drummer for seminal pop trio The Police, shares his stories from before, during, and after his days with Sting and Andy Summers, in one of the most popular and influential bands of the eighties. Strange Things Happen indeed.

When Stewart Copeland gets dressed, he has an identity crisis. Should he put on leather pants, hostile shirts, and pointy shoes? Or wear something more appropriate to the tax-paying, property-owning, investment-holding lotus eater his success has allowed him to become? This dilemma is at the heart of Copeland’s vastly entertaining memoirin- stories, Strange Things Happen. Most people know Copeland as the drummer for The Police, one of the most successful bands in rock history. But they may not know as much about his childhood in the Middle East as the son of a CIA agent. Or be aware of his filmmaking adventures with the Pygmies in the deepest reaches of the Congo, and his passion for polo (Brideshead Revisited on horses). In Strange Things Happen we move from Copeland’s remarkable childhood to the formation of The Police and their rise to stardom, to the settled-down life that followed. It’s a book of amazing anecdotes, all completely true, that take us backstage in a life that is fully lived.

Stewart Copeland is one talented guy in addition to his short career as drummer for 1980s juggernaut The Police, Copeland has a range of other abilities: film composer, videographer, musical-instrument-inventor. Copeland's autobiography shows he has a flair for hilarious, insightful prose. It seems unlikely that a person known for generating a theatrical hail of thunder on stage would generate this, one of the rarest of items in the rock world: a memoir nearly devoid of pretense or self-deception.

The autobiography doesn’t cover much of Copeland’s days with The Police, but that is not a bad thing as there's plenty more to Copeland’s career and his music, so why not provide details of lesser-known aspects of his life and career? The downside of Copeland's book is an assumption of familiarity with his works which may be unavailable to the casual reader who knows Copeland only as "that guy who played for Sting."

Great read, even for those not big fans of The Police.
Posted by Scott Wilson at 9:51 PM