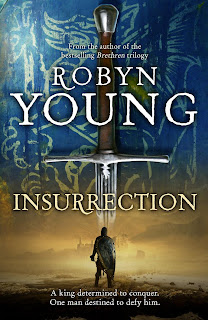 First book of a captivating new trilogy about the ever-popular Robert the Bruce.
The year is 1286 and Scotland is in the grip of one of the worst winters in living memory. Some believe the Day of Judgement has come.The King of Scotland is murdered by one of his squires, a deed pre-meditated by his own brother-in-law, the King of England, a thousand miles away in France. The Prophecy of Merlin has decreed that only when the four relics of Britain have been gathered will one man rule a united kingdom, and Edward I is determined to fulfil it. The murder of Scotland s king is thus just the first in a chain of events that will alter the face of Britain forever. But all is not destined to go Edward s way. Out of the ashes of war, through blood feuds and divided loyalties, a young squire will rise to defy England s greatest king. His name is Robert the Bruce. And his story begins in INSURRECTION.
ABOUT THE AUTHOR
Robyn Young was born in Oxford in September 1975, the only child of a civil engineer father and an artist and folk singer mother. She grew up in the Midlands and Devon and has worked as a festival organizer, a music promoter, an investment advisor and as a teacher of creative writing. She has a Masters in Creative Writing from the University of Sussex and she now lives and writes in Brighton full-time.

Review
Insurrection is a historical fiction novel with many liberties taken to fill the gaps between the facts. Bear this in mind when you read this book otherwise you won’t enjoy this book at all. Those who like their historical fiction to be 100% factual will find many points to complain about. Once you have this established you will know if this is the kind of book you want to read. My wife likes historical fiction and could not get into this book because of this. I read it as a pure piece of fiction and enjoyed it.
Insurrection is the first in a new trilogy, centring on the adventures of Robert the Bruce, and it follows on from the same author's outstanding Templar series The Brethren trilogy. The book is well-paced, with visceral and believable battles scenes, and the characters are well enough rounded to make it thoroughly believable.
Robert Bruce is interesting because he equivocated so much over his support for rebellion against the English occupation of Scotland, notwithstanding his own claim to the throne. The story is set in the winter of 1286, and Scotland is in the grip of the worst winter ever known. The King rides out into the night and is murdered by one of his own men, and thus the story begins.
It’s a very personal story of one man’s journey towards self-realization, played out against a background of family conflict, political rivalry and dynastic ambition.
Young’s Bruce is a thoroughly human figure, battling various conflicting emotional ties and material interests to try and figure out just where it is he wants to go, never mind how to actually get there.
Young creates a world where the ties between the two countries are deep and often genuinely felt. The complex politics of the period are quite intricate and discussed in detail, with clan feuds and politics rife.
Posted by Scott Wilson at 12:30 AM