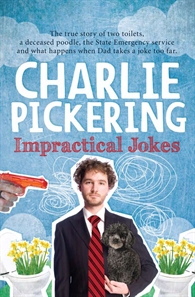 Three toilets, a deceased poodle and some sadly depreciated real-estate ... a rollicking, laugh-out-loud memoir of how a practical joke went too far from one of Australia's brightest young comedians.

'A diabolical ping-pong game of prank and counter-prank across the generations. Hilarious and warm-hearted, Impractical Jokes is both a comic evocation of the Australian larrikin

spirit and an ode to a loving father. Don't just read the jacket blurb - buy it!' - Shaun Micallef

In 1986, Charlie Pickering's dad, Ron, was pushed into a pool by his best friend, Richard. What followed was an all-out water pistol ambush in a five-star restaurant and then ten years of

tit-for-tat payback and near fatal hijinx that eventually involved the State Emergency Service. When maturity is the first casualty of war, things tend to escalate.

Impractical Jokes is the true story of two seemingly responsible, middle-aged men who opted out of having a mid-life crisis and instead gave themselves permission to be silly. It

Charlie Pickering is a comedian, writer and presenter. After throwing away his career as a lawyer, Charlie toured the world performing stand-up from London to Bahrain, earning a nomination

for the prestigious Perrier Award for best newcomer at the Edinburgh Fringe Festival. Upon his return to Australia, Charlie and fellow comedian Michael Chamberlin created and starred in The

Mansion on The Comedy Channel, before going on to host Toast, a weekend breakfast show on Triple M and rocketing to national popularity on Network Ten's The 7pm Project and Talkin' 'bout

Your Generation. He now lives in Melbourne in a small house with a West Highland Terrier named Waldon and a Scottish Terrier named Kennedy.

'Charming company and a natural raconteur' - The Scotsman

Charlie Pickering is one smart, witty and intelligent guy. I’ve enjoyed watching him on Talking About Your Generation since it started and couldn’t wait for this book to come out. Pickering’s humour is very intellectual, with no low brow or profanities to fill the gaps like other comedians these days.

These memoirs are about the friendly rivalry and practical jokes between Pickering and his father, starting at a BBQ in 1986. The two take practical jokes to whole new levels and have no bounds; being at five star restaurants, lesser humorous novelty ties, numerous visits to casualty, old toilets, glitter and the SES. Yes that’s right ... the SES. For those who have only seen him on Talking ‘bout Your Generation or The 7PM Project, this is your opportunity to witness Charlie’s comic genius .

You will laugh out loud and roll on the floor with laughter with each turn of the page in this book. The antics of the two over a ten year period are extremely funny and well worth telling to the nation in Pickering’s memoirs.
Posted by Scott Wilson at 12:43 AM