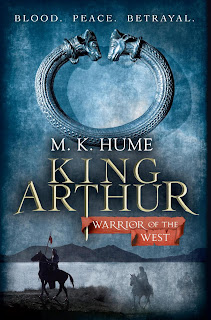 Twelve long, blood-soaked years, have passed since Artor fulfilled his destiny and was crowned the High King of the Britons. Against all odds, Artor has united Celtic Britain and with a last great campaign, has banished the Saxon scourge. The legend of Camlann has begun. But even as Artor's kingdom is at its zenith, even as he has succeeded in conquering all external threats to his rule, his kingdom is being undermined from within. For Artor has chosen Wenhaver (Guenevere) as a second wife. Queen of the Britons, Wenhaver will always love what she cannot have and have what she cannot love, and her bitterness threatens to bring down all those around her. Not only is Artor betrayed by the one person he should be able to trust, he has also learned of appalling perversion at the heart of his kingdom. He must make a terrible choice. Does he commit a deed that leaves him open to comparison with the despotic Uther Pendragon, or does he let evil go unchecked? The burden of leadership, of power, now rests solely - and heavily - on Artor's shoulders for Myrddion Merlinus, master tactician, guiding light for so many years, has left Artor to his fate.

Having recently finished Hume’s first novel in this trilogy, King Arthur: Dragon’s Child, I was eager to get straight into the second book in this series. The first novel was so well written and artistic, yet full of historical detail that I had high expectations for the sequel.

As with the first novel in Hume’s series, the imagery created is brilliant, as is the depth of research apparent by the author in to the Arthurian lore. With the characters well defined and recreated in the first novel, the scene was set for the continuation of the tale. Unfortunately, the novel was written with quite extensive recaps of the first book. While this made the book a complete stand alone piece of writing, it did make it a bit of a let down for the reader already up to speed with the events of Dragon’s Child. So, as a stand alone book, Warrior of the West is brilliant and definitely worth reading. But as a sequel, it lacks the drive that was built up in the first book.

The new events in the book were well written, as with the first novel, but the constant chopping and changing back and forth between the first book and second book really distracted me as a reader.

My recommendation is, read this if you haven’t read the first book, but it you have you may find yourself skipping through the pages recapping the events of book one.
Posted by Scott Wilson at 3:46 PM