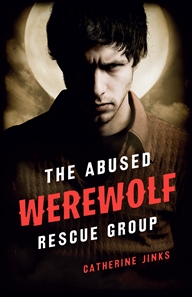 Imprint: A & U CHILDREN

The brilliant companion to The Reformed Vampire Support Group follows the trials and adventures of Toby, whose life changes after he is found in a dingo pen with no memory of the night before.

I still hadn't fully absorbed the terrible possibility that I might actually be a werewolf. A werewolf. I kept stumbling over that word; it made no sense to me. How could I be a werewolf? Werewolves didn't exist.

When Tobias Richard Vandevelde wakes up in hospital with no memory of the night before, his horrified mother tells him that he was found unconscious. At Featherdale Wildlife Park. In a dingo pen.

He assumes that his two rambunctious best friends are somehow responsible, until he discovers that they're just as freaked out as he is. Then the mysterious Reuben turns up, claiming that Toby has a rare and dangerous 'condition'. Next thing he knows, Toby finds himself involved with a strange bunch of sickly insomniacs who seem convinced that he needs their help.

It's not until he's kidnapped and imprisoned that he starts to believe them - and to understand what being a paranormal monster really means.

Catherine Jinks was born in Brisbane in 1963 and grew up in Sydney and Papua New Guinea. She studied mediaeval history at university and her love of reading led her to become a writer. Her books for children, teenagers and adults have been published to wide acclaim all over the world, and have won numerous awards. Catherine's most recent books include the bestselling Genius series.

Catherine lives in the Blue Mountains in NSW with her husband, Canadian journalist Peter Dockrill, and their daughter Hannah.

The books starts right in the middle of things, Tobias has woken up in the hospital and is informed he was found in the Dingo cage at the zoo. Nobody is more shocked then Tobias himself who last remembers falling asleep in his bed at home, before waking up in the hospital. Toby is approached by a strange looking man and a priest with a controversial message, Toby is a werewolf

The Abused Werewolf Rescue has a tempo and a life all its own. They are straddling conflicting worlds in which the paranormal exist, and where certain people refuse to accept that they are real.

Toby, our young protagonist and narrator, has a hard time coming to terms with his newly discovered werewolf "condition".

Reuben had a thankless and intensely difficult job with Toby and he had to make some hard decisions and take serious action. But he was more than able to step up for all the abused werewolves in the series!
Posted by Scott Wilson at 12:06 AM