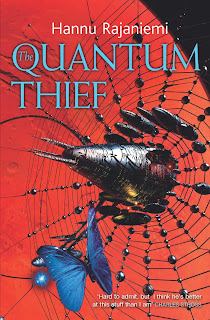 The Quantum Thief by Hannu Rajaniemi

The most exciting SF debut of the last five years - a star to stand alongside Alastair Reynolds and Richard Morgan.

Jean le Flambeur is a post-human criminal, mind burglar, confidence artist and trickster. His origins are shrouded in mystery, but his exploits are known throughout the Heterarchy - from breaking into the vast Zeusbrains of the Inner System to steal their thoughts, to stealing rare Earth antiques from the aristocrats of the Moving Cities of Mars.Except that Jean made one mistake. Now he is condemned to play endless variations of a game-theoretic riddle in the vast virtual jail of the Axelrod Archons - the Dilemma Prison - against countless copies of himself. Jean's routine of death, defection and cooperation is upset by the arrival of Mieli and her spidership, Perhonen. She offers him a chance to win back his freedom and the powers of his old self - in exchange for finishing the one heist he never quite managed...

Hannu Rajaniemi is from Finland. He is 30 years old and has a PhD in String Theory. He has lived, taught and worked in Edinburgh for the last seven years where he was a member of the high profile writing group that also included Hal Duncan and Alan Campbell.

Hannu Rejaniemi is a new author and this is his first novel, so I’ve taken that into account when reading and reviewing The Quantum Thief. It takes a writer a book or two to develop their craft and you really can’t base an author on just one book.
The Quantum Thief is about a thief, Jean le Flambeur, recently rescued from the Dilemma Prison by the mysterious Mieli and her talking spaceship (sounds like Hitchhikers Guide to me), incurring a debt that can only be repaid in a moving city on Mars.

Rajaniemi has developed a very complex and intriguing society which comes across well. In some ways there may almost be too many ideas being thrown out - I'm sure I passed over some mind-bending bits of future society without even noticing, but that's hardly a criticism of the book.

The story is also quite complex and well though out, not bad for a first novel at all.
Posted by Scott Wilson at 9:39 PM