Book Review: The Alchemist in the Shadows by Pierre Pevel 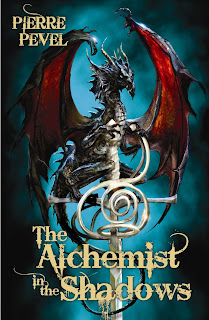 Superb swashbuckling fun - with dragons!
Cardinal Richelieu, the most powerful and most feared man in France, is on his guard. He knows France is under threat and that a secret society known as the Black Claw is conspiring against him from the heart of the greatest courts in Europe. They will strike from the shadows and when they do the blow will be both terrible and deadly. To counter the threat, Richelieu has put his most trusted men into play: the Cardinal's Blades, led by Captain la Fargue. Six men and a woman, all of exceptional abilities and all ready to risk their lives on his command. They have saved France before and the Cardinal is relying on them to do it again. So when la Fargue hears from the deadly Italian spy La Donna who demands Cardinal Richelieu's protection before she will talk, la Fargue has to accept. Because La Donna can name their enemy: the Alchemist in the shadows...
ABOUT THE AUTHOR
Pierre Pevel, born in 1968, is one of the foremost writers of French fantasy today. The author of seven novels, he was awarded the Grand Prix de L'imaginaire in 2002 and the Prix Imaginales in 2005, both for best novel.

The Cardinal's Blades (Bfmt 9780575084391 Oct 10)
Review
I have not read anything by this author before so came into the book with no preconceived notions about what to expect. It is refreshing to open a new novel and have no idea where the journey will take you. The Alchemist in the Shadows was the second book in a series, and not knowing this, I didn’t have the background of reading the first book to rest on.
As a standalone book, it worked well. There were frequent back story dropped in to recap events from the first novel. If you’d read the first book, this may be a drawback as you’d already have a better understanding of the prior events and wouldn’t need this recap. The pace of the book was pretty constant and it flowed smoothly, making it a good read. I have heard that this was translated from Pevel’s native French language, so it is impressive that it was a constant flow, not loosing anything in the changeover of language that some other novels have suffered from.
Richelieu is the main character in this book with a supporting cast of a group known as the Cardinal's Blade. The story is set in France and uses the author’s background and research to portray this setting perfectly.