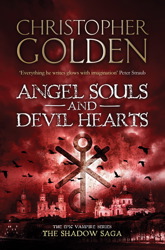 In the second book of The Shadow Saga the Shadows have been exposed as living amongst us and the ancient vampiric race now finds itself threatened by the most powerful demon of all: human prejudice. In a world where the good are no longer distinguishable from the bad and where Shadows are indeed the saints, a holy war is about to begin, pitting humans and vampires together against the dark forces of Hell. And as they fight for their survival in the face of a betrayal by one of their own, the Shadows begin to discover at last the astonishing, long-hidden truth of what they are. What they will learn about their mysterious origins is more extraordinary -- and more explosive -- than they could possibly have imagined.

This is an excellent vampire series. Very different take on vampires. If this is your first Christopher Golden book in the Shadow Saga, I would highly suggest reading the first book Of Saints and Shadows then this second one, Angel Souls. Book two takes off directly after the events in book one, making the first book a must have to fully appreciate this novel. At the end of book 1, the world found out that vampires really do exist. The world is also very sympathetic to vampires because in book 1 a few evil members of the church tried to have them exterminated, and all of it was caught by a news crew. Vampires now have rights in the world. Counsels have been formed to help vampires and humans work and live together.

Not all vampires, or humans are happy with this arrangement, especially Hannibal, one of the old school vampire leaders who is upset at the new life of the vampire. Hannibal preferred seeing humans as lunch rather than a guest for lunch. He doesn't want to be their friend, he wants to hunt them. Hannibal secretly starts to build his own army of evil vampires. He has plans to attack when the time is right.

What I really liked about this book was that it introduced some different and interesting characters. Golden uses a bunch of characters from history in different ways. We have Buffalo Bill, we have Charlemagne, and we have another character I won’t name because I don’t want to spoil it. They’re vampires, which means they’ve had an opportunity to change with the times and I can excuse their irregularities to some extent.

This is a great series and I can’t wait for the third book in this series to come out.
Posted by Scott Wilson at 4:48 PM