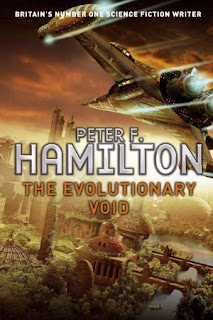 One of the world's bestselling science fiction writers

Peter F Hamilton's startling perspectives on tomorrow's technological and cultural trends span vast tracts of space and time, his stories are as compelling as they are epic in scope, and yet they are always grounded in characters – human, alien and other – who, for all their strangeness, still touch our hearts and fire our imaginations. Now, in The Evolutionary Void, Hamilton concludes the highly acclaimed Commonwealth saga that has unfolded in The Dreaming Void and The Temporal Void.

Peter F Hamilton was born in Rutland in 1960, and still lives near Rutland Water. His previous novels include the Greg Mandel series and the bestselling and groundbreaking Night's Dawn Trilogy. His most recent novels are Pandora's Star (2004) and Judas Unchained (2005) – which constitute the Commonwealth Saga – and The Dreaming Void (2007), and The Temporal Void (2008) the first two novels in the Void trilogy, of which The Evolutionary Void is the concluding volume.

The Evolutionary Void is the eagerly anticipated conclusion to the Void trilogy which itself is a continuation of the Commonwealth Saga a universe first described in the book Pandora's Star. The title of the trilogy is based on the main theme of the series; The Void – an increasingly growing artificial reality that lies at the centre of the galaxy, consuming whole star systems to fuel itself.

Hamilton is well known by readers for his ability to juggle several different compelling characters, his speculations about future human development, and his ability to balance hard science and riveting space opera. This series is the typical hard core science based science fiction that will strongly appeal to readers of that branch of sci-fi. The books in this trilogy were mammoth and a bit of a struggle at times to get through. I find myself comparing Hamilton’s writing to that of Frank Herbert, especially the Dune series where there is a great story buried beneath a bit of fluff. The epic proportions of this book may appeal to a certain reader, but I prefer slightly shorter novels with less of the Opera and more of the action.