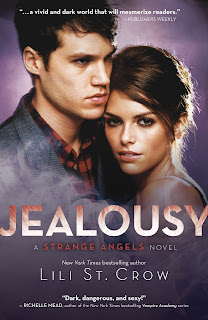 Jealousy, the third book in the Strange Angels series by Lillith St Crow sees Dru Anderson back in another bestselling supernatural blast-fest that Richelle Mead, author of the Vampire Academy series, calls 'dark, dangerous, and sexy!'
Love is a battlefield.

Just when Dru thought she was safe, everything exploded in her face. Her mom and dad are long gone, her protectors Graves and Christophe kinda want to rip each other's throats out, and a four-hundred-year-old nosferat named Sergej won't stop hunting her until his bloodthirsty army of suckers has torn her to shreds.

Dru's finally made it to the Schola Prima - the Real Deal djamphir training facility and home of the Order - and life is about to get even more Real World. There's a brand new svetocha in town - a readheaded vixen named Anna who's got the Order wrapped around her pretty little finger, and who'd rather kill Dru than share the spotlight. Turns out Dru's got something Anna wants. And his name just happens to be Christophe Reynard.

Jealousy is the third book in the Stange Angels series and a nice flow on from the previous novel, Betrayals. The main character, Dru Anderson, thinks that she might finally be safe and in an environment with other’s like herself, in the largest Schola on the continent. It has taken her the first two books to learn what being a svetocha–half vampire, half human entails. If she survives her training, she will be able to take her place in the Order, holding back the vampires and protecting the oblivious normal people.

There are twists and turns a plenty in this third book with a dark and conniving enemy within the Order who has a different agenda than that of the Order. If you enjoyed the first two books in the series then you will enjoy this one just as much, but if you don’t like the paranormal romance genre, then this one won’t do anything to sway your view.
Posted by Scott Wilson at 5:56 PM