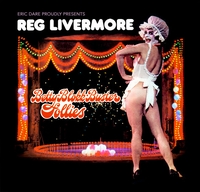 While I have heard of Reg Livermore before, I had never heard this album from the 70's by him. Reg is a well know Australian singer, actor and star of the theatre.

Betty Blokk Buster earned 1 Platinum and 2 Gold records back in the 70's when it was originally released, with the album reaching number 15 in the Australian Charts, and remaining on the charts for over 1 year.

Betty Blokk Buster Follies is a one man theatrical show by Livermore, with many showtunes, writen either by Reg or other famous musicans. I wasn't sure whether to take this serious or if it was just a light hearted, tongue in cheek performance paying out on the theatrical musical genre inspire by Gilbert and Sullivan.

As with all concept albums, this one will appeal to a specific audience and market at the exclusion of others. It is really a CD that needs to be listened to from start to finish to follow the story of the characters, rather than an album that you can pop on and listen to driving to work in the morning.
Posted by Scott Wilson at 12:12 PM

I saw the show and has never left my mind, also his next 2... he is fantastic and perhaps he was so entertaining even my very stoic husband at the time seemed to enjoy and did not pull the poster of reg, (he was sexy man) from my wall. That came years later.
What performances!!!