Scott: Thank you so much taking the time to chat with us here at The Fringe magazine. For fans of The Last Chronicles of Thomas Covenant it has been a long wait. Can you tell us why this next book was so long in the making?


Stephen: The short answer is fear. After writing "The Second Chronicles of Thomas Covenant," I realized that I was not a good enough writer to handle "The Last Chronicles"--and I did not want to disappoint myself, my characters, or my readers. So I spent nearly 20 years trying to improve.

Scott: For aspiring authors it is interesting to know if the plotlines have diverged much since you began writing the Covenant books, or did you have the entire plot more or less figured out from the very beginning?

Stephen: While I was working on the first "Covenant" trilogy, I had no intention of ever writing more. But when the ideas for "The Second Chronicles" came to me, they implied the ideas for "The Last Chronicles." Time, thought, and skill always cause details to diverge; but the main plotlines have remained constant.

Stephen: I work what I call "business man's hours," 8 hours a day, 5 days a week. But only 5 hours a day are spent in actual writing. The rest of the time goes into revising and planning.

Scott: After writing novels for three decades you must have seen some changes in the fantasy genre, what would you say has changed the most since you began writing?

Stephen: There are far more fantasy novels published now than there were 30 years ago--and most of them seem far more conventional than the books I was reading back then. 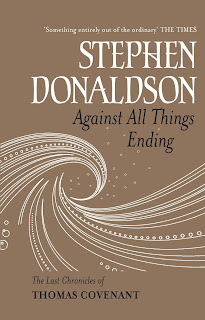 Scott: Who is your favourite character in your stories and what do you like most about them?

Stephen: That changes from moment to moment, according to variables like mood and context. At this moment, I would choose Hashi Lebwohl from my GAP novels. Five minutes from now, it might be Master Eremis ("Mordant's Need").

Scott: What are you reading at the moment and who are your favourite authors?

Stephen: At present, I'm studying (rather than reading) Steven Erikson's "Crack'd Pot Trail." My favorite contemporary authors are Erikson and Patricia A. McKillip, with Tim Powers close behind.

Stephen: My personal experience is badly out of date. I found a publisher by unsolicited submission. But I'm told that now it's far more effective to find an agent first. Of course, it always helps to have a track record of some kind--or some version of "celebrity" (notoriety?).

Scott: Do you have a passion for short stories and have you had many published, and if so, what market did you send them to?

Stephen: I enjoy writing shorter fiction, but I've written very few such stories because my novels take so much time. Some of my shorter fiction was first published in "The Magazine of Fantasy & Science Fiction," some in anthologies, and some in my own collections, "Daughter of Regals and Other Tales" and "Reave the Just and Other Tales."

Scott: What would you say has had the biggest influence on your style of writing?

Stephen: Other writers, primarily those I consider to be The Greats: Joseph Conrad, Henry James, William Faulkner, and J. R. R. Tolkien. But Patricia A. McKillip has also inspired me.

Cheers,
Posted by Scott Wilson at 1:44 AM