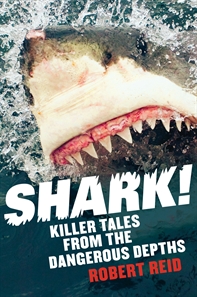 Personal accounts of encounters with sharks from shark hunters, divers, biologists and everyday swimmers who meet up with sharks either deliberately or by accident.
Description
SHARK! The cry that strikes fear into the hearts of beach lovers around the world. It carries a chill of terror, that death is nearby and waiting. Or injuries so shocking that the mind recoils from the thought. This book chronicles shark attacks both on Australia's fatal shores and overseas. It also records miraculous escapes - some so bizarre they defy belief, and some that display extraordinary courage in the face of extreme peril.
Robert Reid interviews famous shark hunters and other adventurers who speak for the first time about their dangerous encounters with these fearsome predators. Reid investigates the phenomenon of the so-called 'rogue' sharks, those that stalk and kill humans in numbers, in the same place, at the same time. These are gripping stories that will both fascinate and frighten, stories that will take the reader into the realm of these strange but terrible creatures. They have ruled the oceans with ruthless efficiency for more than 400 million years. They are the silent killers of the deep.
About Robert Reid
Robert Reid is a journalist based in Cairns and author of Croc!, published by Allen & Unwin in 2008.
Review
Let me tell you to start off with that I was keen to read this book, having somewhat of an obsession with Sharks after three personal experiences over the last thirty years.
Robert’s book was well researched, set out and comprehensive in details and history of Sharks and attacks both in Australia and overseas. One of the best aspects of Reid’s book was that there was no indication to a personal bias on the ongoing debate about what we should do about sharks, kill or let live. There were chapters for each side of the debate and excellent research and interviews into both views, giving the reader ample information to make up their own mind about this issue if they wanted to.
Included are a number of pages of both colour and black and white photos (I would have liked more) to give the reader a visual indication of some of the topics discussed.
The aspect I most enjoyed was the multitude of interviews with survivors and shark experts, such as Hislop and the Taylors.
This was a fantastic read and well researched.
Posted by Scott Wilson at 2:33 AM