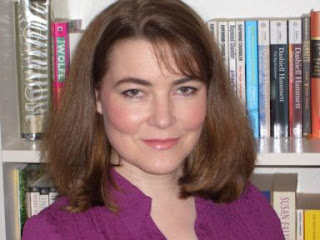 Scott: Thank you so much taking the time to chat with us here at The Fringe magazine, it’s always a pleasure to have a chat with published authors about their work. We really enjoyed your recent submission to us, Man With A Suitcase and look forward to reading your collection of short fiction; 'All The Little Things That We Lose : Selected Stories' . How has your book been received in the market to date?


Deborah: I’ve had some wonderful feedback from readers, and I cherish every comment. The Short Review (UK) gave the collection a glowing write-up. The fact that one of my flash fiction pieces actually made the reviewer cry would have to be one of the greatest thrills of my career! If you’d like to read it, here’s the link: http://www.theshortreview.com/reviews/DeborahSheldonAlltheLittleThingsThatWeLose.htm

Scott: Your writing credentials are pretty impressive, with medical writing, non-fiction, magazine article, fiction and TV Scripts. You have some well known shows under your belt with Neighbours, Australia’s Most Wanted, and State Coroner. How did you first break into the TV script market?

Deborah: Way back in 1990, I got a job with Grundy Television as researcher on the drama program ‘Embassy’. My plan was to move sideways into scriptwriting. However, I was apparently such a good researcher that my bosses didn’t want to lose me to scriptwriting! But I persisted. I had the opportunity to work as a Neighbours storyliner for a while, and then later, on the basis of a spec script, I was accepted into the pool of Neighbours scriptwriters. I think I wrote about six episodes. I also worked on Australia’s Most Wanted as researcher and scriptwriter of crime re-enactments. My work with Crawfords Australia came from an original screenplay I sent them on spec. They optioned the screenplay, then offered me the gig on State Coroner. After that, my interest in non-fiction writing (including medical writing and magazine journalism) led me away from television scriptwriting. I guess that’s why I’ve enjoyed such variety in my writing career – I keep getting distracted and seduced by new forms of writing.

Deborah: I don’t get time to exclusively write every day – my average is probably two to three writing days per week. (That said, I always manage to grab a few extra half-hours here and there.) On a typical writing day, I would probably put in maybe four to five hours at the keyboard. Depending on the project, my yield can be anywhere from 500 to 2000 words or so. I tend to compulsively rewrite and edit as I go along, which slows down production on a first draft.

Scott: What type of writing do you enjoy the most? I’d imagine that the variety of mediums and genres you write for would require quite different techniques and style?

Deborah: The techniques are very different from one form to the next. For me, the challenge of a new form is one of the delights of writing. For the past few years, short story writing has been my absolute favourite. The short story appeals to me because of its brevity. Without the luxury of length, every element has to work extra hard to achieve mood and resonance, and that strikes me as an interesting challenge. Second favourite to the short story is scriptwriting because of its heavy reliance on dialogue. That’s tricky to get right! Recently, I’ve written a few short stage plays, which have been performed in Melbourne and Sydney. Next year, my first radio play will be produced and broadcast, and I’m excited about that, I can’t wait to hear it.

Scott: Having written for Grundy’s Women’s Fitness Australia, Leisureweek, Australian Women’s Weekly, just to name a few publication, what would you say was the most enjoyable organization to work for?

Deborah: Every job and writing gig has its good points. I appreciate that I’ve been able to work with great people from so many different organisations over the course of my career, and I hope to work with many more.

Scott: Have you written many movie scripts and if so, how different is this to TV scripts?

Deborah: A few years ago, Crawfords Australia optioned my original screenplay, ‘Bodily harm’, but the project never went ahead. I haven’t given up on it yet – in 2011, I plan to approach agents to see if I can get ‘Bodily harm’ into the hands of producers and directors. (If any producers or directors are reading this, call me!) The main difference between writing an original script and a television script is that with the former, you are in complete control of the material, whereas with the latter, you must conform to pre-existing characters and plot lines. That’s a huge difference. Of course, the other difference is that when you’re contracted to write for someone’s television show, you get paid.

Scott: When you write a TV script, Movie script or Play, how much does it change from your initial idea to how the actors end up playing the characters and scenes?

Deborah: While writing, I visualise my characters in detail, including the way they behave and speak and how they interact with each other, so it’s always fascinating to see the characters reinterpreted by directors and actors. Generally, I love the fresh angle. Only once or twice have I ever winced!

Deborah: I read lots of short story collections, and usually have a couple on the go at once. Believe it or not, I’m actually reading a collection that features one of my own stories. The book is called ‘An eclectic slice of life’ and the publisher is Dark Prints Press. The other book I’m reading is ‘On the edge’, a short story collection from Five Mile Press.

My five favourite books…wow, what a tough question. I love so many books. These are just some of the many that I love: ‘The Maltese Falcon’ by Dashiell Hammett, ‘Collected Stories’ by Raymond Chandler, ‘Close Range and other stories’ by Annie Proulx, ‘Rum Punch’ by Elmore Leonard, and ‘Rope Burns: stories from the corner’ by FX Toole.

Deborah: Be professional. The rise of e-mail and texting has encouraged a chatty style of communication, which I don’t think gives the right first impression to a publishing house. Always follow the submission guidelines to the letter. And don’t take it personally if you get rejected.

Deborah: Just five? Hmmm…Raymond Chandler because his writing is so tough yet tender hearted – I’m sure he’d be a fascinating man and a great conversationalist…Budd Schulberg, because anyone who could come up with such a fabulous story as ‘On the waterfront’ is someone I would want to meet…Raymond Carver, so I could sit at his feet and get some incredible writing tips…Homer, because he tells wonderful epic stories, which would help to pass the time while we were waiting to be rescued…And Dr Seuss for some giggles.

Scott: Thank you very much for your time talking with us Deb. It has been a great honor to chat with someone with such a wealth of all-round writing experience. I look forward to your next book.

Thanks Scott, I really appreciate your time and interest. I hope The Fringe Magazine gets the wide readership and recognition it deserves.