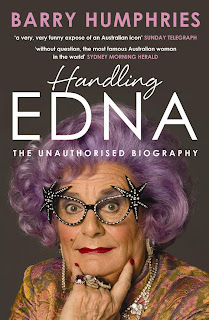 An intimate and penetrating examination of the world's most famous woman, Dame Edna Everage, by the man who knows her best.

In this unauthorised biography, acquired for an unprecedented advance and in spectacular secrecy, long-time manager and the man who was there from the very beginning, Barry Humphries takes a behind-the-scenes, no-holds-barred look at an icon of our times - Dame Edna Everage.Superstar, swami, confidante and advisor to royalty, Hollywood stars and international political leaders, Dame Edna s life has catapulted her far from her humble Moonee Ponds beginnings as a suburban housewife to the most elite social and artistic circles in the world. Who would have thought that this modest Australian woman could achieve so much from London to Louisiana to New York to Tokyo? Who could have anticipated her global fame? Barry Humphries certainly didn't.

Barry Humphries is an internationally famous comedian, actor and writer and Dame Edna Everage is his most famous creation. He is the author of numerous books, including two volumes of autobiography.

Barry Humphries and Dame Edna, both legendary Australian icons, known and loved by many. This autobiography is a great insight into the life of comedian, Humphries and his alter ego.

For those who don’t know this, Barry Humphries wrote and published the autobiography of Dame Edna Everage in the late 1980s, called My Gorgeous Life. In what has to be a first ever, now Humphries has taken a different tack and instead of writing in Edna’s voice, used his own for an 'unauthorised' biography called Handling Edna. It seems unlikely that this sort of feat has been attempted before.

I love how Humphries writes this as a third party, totally unrelated and unauthorised look at the character he created, Dame Edna Everage. This keeps in true form with Humphries humour, separating the two personalities of himself and his creation. This makes the reading very interesting and extremely entertaining.

Even the publicity surrounding this book has Humphries brand of humour with releases such as the rumour after the release of the book, that process servers disguised as waiters were ready to serve the author with an injunction from Dame Edna and the estate of Frank Sinatra over an allegedly scurrilous passage in the book linking the two (just another form of humor Humphries throws out there to add interest to the story).
Posted by Scott Wilson at 12:03 AM