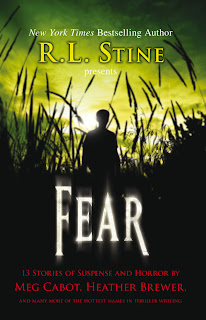 FEAR: 13 STORIES OF SUSPENSE AND HORROR by R.L Stine

In this collection of thirteen fabulously chilling stories - from thirteen true masters of suspense, including five NEW YORK TIMES bestsellers and a number of Edgar Award nominees, all edited by none other than R. L. Stine - nothing is what it seems. From cannibalistic children, to an unwitting date with a vampire, to a crush on a boy who just might be a werewolf, no scary stone is left unturned. A must-have for all fans of the genre!

R.L.Stine has been one of my favourite YA authors since I first picked up a copy of Goosebumps Welcome to Dead House in 1992. There is something about an author that can write a horror story aimed at a young audience and achieve the thrills without the range of tools that are available to adult horror fiction writers. Stine has been called the Stephen King for the young audience, a title that the prolific author well and truly deserves. Stine has pumped out over 361 books in the last twenty years, not a bad effort even if they are around the 100 page mark each.

R.L. Stine's "Welcome to the Club" - A boy is pressured to join a club by killing his mean boss.

Tim Maleeny’s “Ray Gun” – The title says it all.

Jim Rollins’ “Tagged” – The longest story of the collection at 33 pages.

Jennifer Allison's "The Perfects" - The Perfect's children are a babysitter's worst nightmare.

Peg Kehret's "The Poison Ring" - The theft of a poison ring sends a girl on a trail of deception and danger.

F. Paul Wilson's "Piney Power" - A mysterious community enacts their own brand of justice on trespassers.

Meg Cabot's "The Night Hunter" - Even heroes needs a little help once in a while.

Walter Sorrells' "Tuition" - A boy pulls one more theft to pay for his college education.

This collection is a must have for an YA thriller/horror fan.

All of the authors involved in this anthology including R.L. Stine have generously donated their stories to this effort. Half of the proceeds from the FEAR anthology go to support RIF (Reading is Fundamental), and the other half go to support ITW. The International Thriller Writers warmly thanks the authors for their time and effort.
Posted by Scott Wilson at 6:48 PM