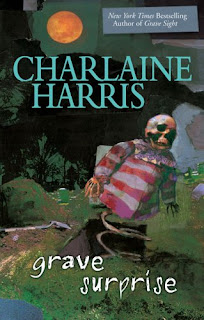 Charlaine Harris is already a star and a New York Times bestseller with her vampire mysteries starring Sookie Stackhouse and her Lily Bard mysteries. This second instalment to her new supernatural mystery series might just be her biggest hit yet. Grave Sight's Harper Connelly is back, and her ability to find the dead and see their last moments is in higher demand than ever...

A college class gets more than it bargained for when Harper gives a demonstration of her uncanny talent. Instead of just finding one body in an old grave, she finds two: the original occupant and a recently deceased girl whom Harper had tried, and failed, to find two years previously. To dispel suspicions about her own innocence, Harper and her stepbrother Tolliver undertake their own hunt to find the killer-only to find yet another body in the same grave.

When I was fifteen, I was struck by lightning. I recovered, mostly. I have a strange spider web pattern of red on my torso and right leg. I have headaches. I have many fears. And I can find dead people. That was the part that interested the professor…

At the request of anthropology professor Clyde Nunley, Harper Connelly and her stepbrother Tolliver come to Memphis to demonstrate Harper's unique talent-in an old cemetery. Nunley is sceptical, even after Harper senses-and finds-two bodies in the grave beneath her feet. One of a man centuries dead. The other, a young girl, recently deceased, whom Harper had once tried, and failed, to locate. But Harper's new investigation into the crime yields yet another surprise: the next morning, a third body is found-in the very same grave…

Grave Surprise is the second book in the Harper Connelly series by Charlaine Harris, with Harper showing her skills off to a college professor and his class. While it is obvious that the professor believes that Harper is a fraud, as only he has seen the secret records of how every person in the cemetery has died there isn't much he can say to discredit her especially when she finds an unexpected body. This is the start of another case for Harper and her stepbrother Tolliver, who are drawn into the action again.

The relationship between Harper and Tolliver is slowly evolving into something else that may raise a few eyebrows with some readers.

Harris writes another story in very much the same fashion and formula as her other books, which will please long term fans who enjoy this style. As far as the mystery goes, I think it was far better crafted in this one than in the first book. I didn't realize who the killer was 10 seconds into the book, and I can see readers suspecting the wrong people more than once as the plot twists and turns.

Not a bad book and better than the first one in the series. I think that the next one will see Harris in full swing with the development of these characters and storyline.
Posted by Scott Wilson at 1:49 AM