Book Review: The Dragon with the Girl Tattoo by Adam Roberts 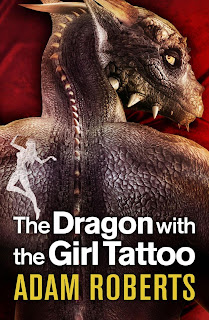 Lisbet Salamander is young and beautiful. Her scales have an iridescent sheen, her wings arch proudly, her breath has a tang of sulfur. And on her back a tattoo of a mythical creature: a girl.But when Lisbet is drawn into a dark conspiracy she will have to rely on more than her beauty and her vicious claws the size of sabres...A dragon has disappeared, one of a secretive clan. As Lisbet delves deeper into their history she realises that these dragons will do anything to defend their secrets.Welcome to the world of The Dragon With the Girl Tattoo. A world of gloomy Nordic dragons leading lives uncannily like our own (despite their size, despite the need for extensive fireproofing of home furnishings), a world of money hoarded, a world of darkness and corruption. A world where people are the fantasy.

Adam Roberts is Professor of 19th Century Literature at London University. Three of his novels have been shortlisted for the Arthur C Clarke Award. He has also published a number of academic works on both 19th century poetry and SF.

Roberts writes an entertaining and humorous pardody of the now famous Steig Larrson Girl With The Dragon Tattoo in this novel, The Dragon With The Girl Tattoo. The author has created a blog to promote the book, here http://dragonwiththegirltattoo.blogspot.com/, but to date there is only the blurb about the novel and nothing else. I am hoping that Roberts will be regularly adding some humorous snippets or tales here in the same vane as TDWTGT.

Having read the original Larrson trilogy, I was fully aware of the story and eagerly anticipated reading this parody to see where Roberts would take such a serious and dark storyline. With the elements of the original books being very sensitive and gloomy, the chance of being taken as out of place or in bad taste. This is not the case, with Roberts taking the overall story arc and constructing a very tasteful and entertaining take on the original story.

I’ve not read any of the author’s three previous novels, but after reading this latest one and finding it a great read, I will be looking for them to see if they are also written in the same style.

This is definitely a book to read if you like such parodies as the Robert Rankin or Terry Pratchett books.
Posted by Scott Wilson at 12:30 AM