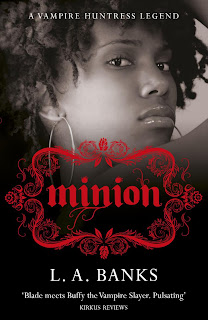 A Vampire Huntress is born every thousand years - someone to lead the Warriors of Light as they fight against the Dark Realms. Damali Richards, born on to the streets of L.A., brought up in the Projects, is our Huntress.The Hunters and the Vampires are fighting in hell and on our streets and Damali will lead the Hunters in the Final War.L.A Banks' novels are steeped in both vampire lore and hip-hop culture and feature a vivid cast of black heroines and heroes. This is dark fantasy for the hip-hop generation.

Minion is the first of a 12 book series by L. A. Banks called the Vampire Huntress Legends. Leslie Banks gives a strong street-wise and smarts approach to the vampire legend, set in a hip hop music world.

Banks give the vamp genre a fresh approach, along with some strong, interesting, and differing characters. Using some very intersting historical and Biblical characters in this series, such as Adam and Eve and Ganghis Kahn. Banks put a very intersting spin on some of our most intriguing fables, tales and legends.

This book is a very quick paced story, sometimes skipping over the details of the fight scenes to move on to the next stage of the story.

Overall, this is a great first book in the series and convinced me to carry on reading the other eleven books when I get them.
Posted by Scott Wilson at 10:28 PM