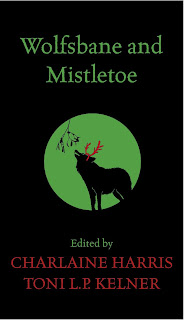 The holiday season can bring out the beast in anyone - literally! Fifteen werewolf tales from an all-star line up.

We all know the holiday season can bring out the beast in anyone - but it's especially hard if you're a lycanthrope! Gathered here together is a veritable feast of fears and tears: fifteen of the scariest, saddest, funniest werewolf tales, by an outstanding pack of authors, best read by the light of the full moon, and with a silver bullet close at hand.Sookie Stackhouse is feeling mighty sorry for herself, all alone for Christmas - until she meets someone with bigger problems than loneliness; lone wolf David Christiansen needs to mend fences with his daughter, before it's too late; Hannah gets an unmerry and potentially life-threatening Christmas present when the hunky werewolf who dumped her last Christmas Eve turns up as her partner on the hunt for a vampire serial killer.All these and more feature in WOLFSBANE AND MISTLETOE, the perfect antidote to Christmas mawkishness!

Charlaine Harris is the author of the internationally bestselling Sookie Stackhouse series, as well as the Lily Bard and Aurora Teagarden mystery series. She is married, with children and lives in Arkansas

Wolfsbane and Mistletoe is a collection of fifteen short werewolf stories by the hottest authors of the paranormal romance genre.

The stories include; "Gift Wrap" by Charlaine Harris, "The Haire of the Beast" by Donna Andrews, "Lucy, at Christmastime" by Simon R. Green, "The Night Things Changed" by Dana Cameron, "The Werewolf Before Christmas" by Kat Richardson, "Fresh Meat" by Alan Gordon, "II Est Né" by Carrie Vaughn, "The Perfect Gift" by Dana Stabenow, "Christmas Past" by Keri Arthur, "SA" by Joe Konrath, "The Star of David" by Patricia Briggs, "You'd Better Not Pyout" by Nancy Pickard, "Rogue Elements" by Karen Chance, "Milk and Cookies" by Rob Thurman, and "Keeping Watch Over His Flock" by Toni L. P. Kelner.

It is hard to decide which one is the best, with many strong contenders to this title. I suppose that the reader will have their own favourite authors and probably find that this will be their favourite tale.

"Gift Wrap" by Charlaine Harris is a Sookie Stackhouse tale following hot on the tails of the last novel Harris, and although it contains Sookie, it is a predominately werewolf packed story.

"The Haire of the Beast" by Donna Andrews is a rather funny tale about the brother of a witch and deals with revenge, brownies and Christmas (what a combination).

"The Night Things Changed" by Dana Cameron is another outstanding story about a werewolf (brother) and vampire (sister) team tracking down a serial killer.

"The Werewolf Before Christmas" by Kat Richardson is definetly not one to read the children before Christmas Eve, with a werewolf taking out poor old Rudolf the Reindeer and then being made his replacement by Santa. "Fresh Meat" by Alan Gordon is also another favourite of mine from the book.
Posted by Scott Wilson at 11:40 PM