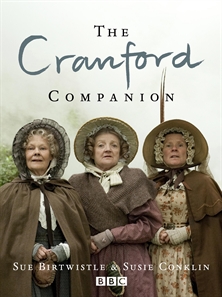 The Cranford Companion by Sue Birtwhistle and Susie Conklin

A joyful celebration of all things Cranford, by the creators of the award-winning television series.

The thriving Cheshire town of Cranford is on the brink of momentous change, with the imminent arrival of the railways and the threat it brings to the established way of life.

In this glorious book, Sue Birtwistle and Susie Conklin explain how Elizabeth Gaskell's timeless stories were interwoven to create their dramatisation; then, join Miss Matty and her friends for a guided tour round their bustling neighbourhood, before discovering how the production team recreated the costumes, landscapes and decor of an 1840s town.

This beautifully illustrated volume is redolent with the attention to detail that has won Cranford so many awards.

About Sue Birtwhistle and Susie Conklin

Sue Birtwistle and Susie Conklin are the creators of the BBC adaptation of Elizabeth Gaskell's Cranford. They have worked together on several well-loved BBC productions, including Pride and Prejudice and the bestselling tv tie-in book that went with it.

The most impressive aspect of this book is that is has been written by the creators of the BBC TV series, Cranford. Given this fact, you know that the history and accuracy of the writing and depiction of the characters within the chapters are going to be 100%.

If you are an avid fan of the series, then you will absolutely want to pick up a copy of this book for yourself as it is the perfect companion to the show. Packed into the pages are some fine details on how the production of the show occurred, how the detailed costumes were produced and how the sets were designed.

Both series, Cranford and Return to Cranford, with all the behind the scenes stories about the production, film locations, map of Cranford, and the characters and actors who portray them are detailed. Included are points of historic interest, such as the building of the railroads, as well as information on etiquette, the fairer sex, Victorian society and more.

With Judi Dench’s recent biography, and Furthermore, being released this year, this is a well timed released for fans of the actress.
Posted by Scott Wilson at 8:47 PM