Book Review: An Object of Beauty by Steve Martin 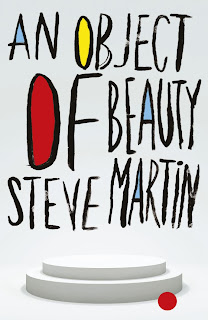 An irresistible look at the glamour and subterfuge of New York's art world, from bestselling author and Hollywood star Steve Martin.

Lacey Yeager is beautiful, captivating and ambitious enough to take the NYC art world by storm. She begins her career at Sotheby's, amidst the winks and nods of the fabulously wealthy. But hungry for more - and pursued by a whiff of scandal - Lacey migrates to edgy Downtown, watching Hirsts and Warhols multiply in value before her eyes.Charming men and women, old and young, rich and even richer, Lacey's ascendancy seems assured. But when the art world bubble looks set to burst, a secret from her past rears its head, threatening to undermine everything she has worked for.

Steve Martin is one of today's most talented performers. His huge successes as a film actor include such credits as Roxanne, Father of the Bride, Parenthood and The Spanish Prisoner. He has won Emmys for his television writing and two Grammys for comedy albums. In addition to the bestselling Pure Drivel, he has written several plays and the highly acclaimed novels, SHOPGIRL and THE PLEASURE OF MY COMPANY. His work appears in The New Yorker and The New York Times.

I have never read any of Steve Martin’s previous novels, yet have been a big fan of his movies for years so I was not sure what to expect in this book. I was hoping that it would be as hilarious as Martin’s comedy from the big screen. Unless the reader is interested in art or open to learning about the art world, this book is not going to appeal to them. It isn’t a rolling on the floor laughing out loud book that you would expect from such a great comedian, but rather a well written artistic story. Steve Martin's writing cannot be faulted; it is impeccable and sensual.

The book is about Lacey Yeager, an up and coming art dealer and set over a period of about fifteen years in the New York City art world. Daniel Franks, is the narrator writing the book to excise Lacey from his mind, (sound bizarre and interesting already?).

We follow Lacey from her entry-level job at Sotheby's to a high end gallery on the Upper East Side, to Chelsea, where she opens her own gallery.

The book takes us deep into the art world and behind the scenes at auction houses, houses of collectors and international dealings. Martin writes as detailed history of the art industry and lets the reader learn about expensive European art, the Picasso, the Van Goghs to the modern pop art of Andy Warhol and a new movement.

Martin also takes us through the financial ups and downs of the art world as it shifts from conservative to modern art, survives 9/11 and the stock market crash of 2008.

Overall, this is a well written and interesting novel, just not what I was expecting from Martin, (not that that was a bad thing).
Posted by Scott Wilson at 12:44 AM