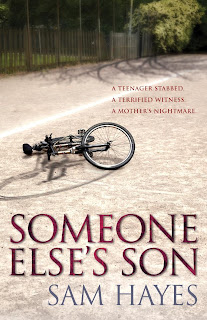 Sam Hayes' harrowing emotional thrillers about the secrets within ordinary families are perfect for fans of authors from Nicci French and Sophie Hannah.

A tense and powerful emotional thriller that asks: Do we ever really know our children?What would you do if your teenage son was stabbed to death in the school playground? That's a question chat-show host Carrie Kent can well imagine posing to any one of her studio guests. Her daily morning TV show deals with real life in all it's grubby glory - from underage sex to benefit swindlers, cheating partners to DNA testing. It's a million miles away from her perfect, polished existence...But when she gets a call to say that her beloved son Max has been murdered, Carrie and her ex-husband Brody will have to enter a world of poverty, fear and violence if they want to find out what really happened. And when the shocking truth is finally revealed, will they be able to live with it...?

Carrie Kent, a successful television presenter and mother of teenager, Max. Ms Kent comes across as hard-headed, business-like, aloof and rather distant but that's the whole point, of course. Her son's life is crap, not having handled the break-up of his parents all that well. He shunts between both homes on a regular basis not really knowing - or even caring - where he belongs.

The characters alternate between the past and the present. It works well. The reader knows of the up-to-date situation with the various characters, but not why. We delve into the past regularly to see how they tick.

After Max's death, a rather brittle Carrie thrust into another world. A world in which she is alien - albeit she deals with it on her regular television programme. The poverty, the poor housing, the vandalism, the bullying ...

One phone call changes the way she sees the world...

Her precious teenage son is lying on a mortuary slab, stabbed to death within yards of his school gates in London. Just one girl, a lonely, bullied friend of Max, witnessed what happened and she is refusing to talk. It is only then that Carrie realises that she lost touch with the real Max. It is only then that she notices for the first time that the 15-year-old boy she thought she knew, she notices for the first time the red tints in his hair and his silver skull earring.

By her side is Professor Brody Quinnell, Carrie’s ex-husband and father of Max. Brody is black, unconventional and blind. Their marriage didn’t last long after Brody lost his sight about nine years ago.

Someone Else’s Child makes for the same uncomfortable reading as her other incisive novels but it also has her trademark sympathy and understanding written all over it.
Posted by Scott Wilson at 9:32 PM