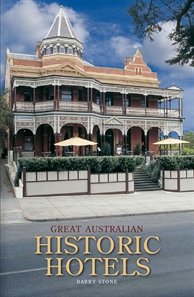 Barry Stone's fascinating insight into Australia's most noteworthy hotels takes us inside the buildings which have hosted and witnessed the development of our Great Southern Land.

On Christmas Eve in 1882 an impromptu game of cricket was organised between the touring English Cricket team and a local side in the grounds of Rupertswood, a 50-room Italianate mansion in Sunbury, 30 minutes drive north of Melbourne. At dinner that night Rupertswood's owner, Lady Janet Clark, marked the visitor's victory by presenting the English captain, Ivo Bligh, with a tiny urn that contained the charred remains of a set of bails. Thus the legend of the Ashes, Australia's sporting Holy Grail, was born.

In Great Australian Historic Hotels each hotel provides its own tantalising insight into the development of our nation as seen from its windows, porches and balconies. From the tragic immigration tales of Q Station to the mining of oil shale by the Glen Davis Hotel in NSW's Capertee Valley; from the political skulduggery at the Hyatt Hotel Canberra to the viticulture of Padthaway Homestead; from the expansion of the Swan River Colony near Faversham House to the Victorian Gold Rush alongside Freeman on Ford. These hotels have seen it all, and they have rather a lot to say in the most salubrious of settings.

We journey to every state in the nation, sometimes to the hotels we all know or think we know - like the Windsor in Melbourne - but most often to places we've never heard of. Places like North Bundaleer and Foxhunters Return, Poltalloch Station and Schouten House, hotels selected not for their glitz factor or their star ratings necessarily, but for their ability to tell a story. Their story and ours, too.

Barry Stone began his writing career as a freelance travel writer in 1997 and has since written for some of Australasia's leading travel magazines including Holidays For Couples, Australian Traveller, Destinasian, Destinations and various in-flight publications. His articles have often focused on historic hotels both in Australia and overseas.

In recent times, however, travel writing has taken second place to his new life as an author. In 2009 he wrote his first of two 90,000-word history titles for Murdoch Books, both due for international release in mid-2010, and has since been given a third title by a grateful commissioning editor.

As an avid fan of Australian culture and history, I was keen to delve into the covers of this book and read about some of the famous and classical hotels of our great nation. Having visited some of the locations mentioned, I was eager to see how they were portrayed and described in comparison to my recollections of these landmarks.

I can see this book being used as a great holiday roadmap with a multitude of fantastic locations to spend a few months travelling around Australia and checking off each historic hotel visited.

The book is broken down into five sections; CBD Hotels, Suburban Hotels, Homesteads, Country Towns and Grand Mansions. Each Part has some great research and detail into the history of these great Aussie buildings and photos to encourage the reader to visit the locations. The only complaint I have about this is that the photos are only black and white. I would have loved to see these buildings in full colour to really appreciate the beauty of the structures.

Here are the historical hotels covered in this great book;

Chapter 27 Rupertswoo
Posted by Scott Wilson at 2:45 AM