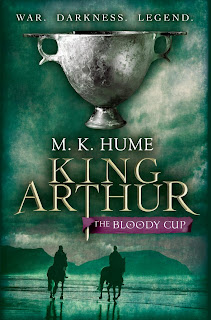 For many years, the people of Briton have enjoyed peace and prosperity under the reign of King Artor and the Union of Kings. Having spurned the despotism of his predecessor, Uther Pendragon, Arthur has ruled with a strong sense of duty, goodness and honour. Artor is now weakening with age, however, and the seeds of discontent are being sown. Seeking to cleanse the land of Christian belief, dissenters need a symbol with which to legitimise their pagan claim and gather malcontents together into a cohesive weapon. These shadowy, subversive elements seize upon the ancient cup of Bishop Lucius of Glastonbury as a way of fragmenting Artor's hard-fought-for kingdom. But first, they must lay their hands on the relic and, in doing so, unleash a force for evil from which murder and violent mayhem ensue. But it emerges that the ultimate threat to Artor's rule lies far closer to home; Artor is betrayed by kin. Celt will slay Celt and the river will run with blood.

Set in post-Roman Britain in the fifth century, King Arthur: The Bloody Cup is the third part of a trilogy retelling the Arthurian legend. Many of the main characters are familiar figures from the legends. To add authenticity and historical accuracy, Hume endows her characters with their Celtic and Saxon names, which many readers will not be familiar with; including Artor (King Arthur), Wenhaver (Guinevere), Gawayne (Sir Gawain), Percivale (Sir Percival), Galahad, Bedwyr (Sir Bedivere), Nimue, Artor’s half-sisters Morgan and Morgause, and Morgause’s son Modred (Mordred). Other characters are fictional, such as Artor’s bodyguard Odin and spy chief Gruffydd, and the villains Pebr and Gronw

In her vivid and action-packed Arthurian trilogy, academic turned novelist M K Hume opts for the latter, lending the legendary kingdom of Cadbury a darker and richer flavour than the more familiar sugary prototype.

The Bloody Cup is the final instalment of what has been an ambitious and exciting series in which idealised images of the medieval leader are swept away to be replaced by a flawed, violent and very human warrior king.

This Arthur is attractive, charismatic and brave, he has brought peace and prosperity to Britain and spurned the despotism of his predecessor Uther Pendragon, but he also has ruthless enemies who would not hesitate to sweep him from power.

The beauty of embarking on this kind of quasi-historical fiction is that however Hume had chosen to conclude the trilogy, there could be little argument against it. As such there is no feeling of disapproval at its conclusion, as previously there are sufficient nods to the traditional without allowing it to undermine the originally of this interpretation

Epic in scope and full of malevolence and raw adventure, The Bloody Cup is a superb sign-off to a compelling series.
Posted by Scott Wilson at 9:40 PM