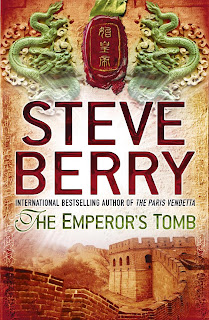 The Emperor's Tomb by Steve Berry

A new Cotton Malone adventure that takes our hero from Europe to the Far East and a race to unlock the mystery of an ancient tomb.

Hearing that his old friend Cassiopeia Vitt is in trouble, Malone follows the few clues he has and realises that they are in the middle of something huge, involving Russian and US oil interests and a centuries-old secret. After stumbling across two dead bodies and into the crosshairs of his former boss, Malone finds himself in a race to unravel the mystery of an emperor's tomb, a sinister society, and a deadly battle between two ruthless men for supremacy in China and the world.

Steve Berry is the New York Times bestselling author of eight previous action and conspiracy thrillers. Steve and his wife Elizabeth have started a charitable organization, History Matters, dedicated to aiding the preservation of our heritage. Steve is currently at work on his next novel.

I have never heard of Steve Berry before, nor read any of his previous books so had no idea what to expect from this novel. In a sense, this is a great way to go into a new book, having no preconceived ideas about what the style or story will be like, no previous books to compare the one in your hand with. It is refreshing to have this clean approach to a book and gives the book more of an even playing field to start off with. That being said, this review can only give you a guide as to this novel alone and none of Berry’s previous works as I have no idea if this is similar to any other novels the author has written.

The story starts with the main characters, Cotton Malone, an inoffensive bookseller in Copenhagen and Cassiopeia Vitt, frequent saviour of Malone, being chased through Asia, only to quickly cut back to how the story ended up at this point. While the opening scene quickly draws you in with the action and thrills, it drops back the pace to a slower read almost immediately. I feel that it should have skipped this opening scene and began with build up to start with.

If you like lots of false leads, blind alleys and complex plot lines, then this political thriller will be of interest to you. It is full of International intrigue, spies, Oil reserves, the tomb of China's first emperor, child kidnappings and a fair amount of historical fiction.
Posted by Scott Wilson at 2:08 AM