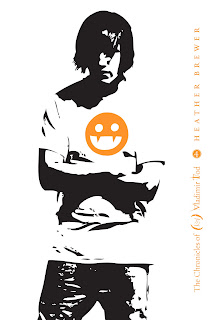 Things are looking dark this year for Vladimir Tod. With Uncle Otis awaiting trial for crimes against vampire kind, Vlad seeks the help of a mysterious and powerful vampire, Dorian. Unfortunately, Dorian has his own agenda and Vlad is about to be the main item on it. Beset on all sides, from former friend and current foe alike, Vlad will have to use all his skill and training just to survive his junior year.

Visit the author online at heatherbrewer.com for blogs, forums, minion bling and more . . .

Eleventh Grade Burns is the forth book in the Vladimir Tod series, and yet another fine piece of writing by Heather Brewer. As the series has progressed, Brewer has spent time fleshing out the characters and making them full bodies actors that the reader can ready get to know. My only issue with Vlad's character is that he is "bothered" by his vampire mentors' use of human slaves and killing of people when they feed. This just doesn't seem to be in character with what we know about Vlad. I imagine he would be disgusted and enraged, not just a little sad that Otis killed a bunch of people or hoping that Vikas tries to kill people outside of the city limits. Perhaps Brewer painted herself into a corner by trying to portray a brutal reality of vampire life while trying to develop mentors for Vlad you are supposed to grow and love?

It is good to see Vlad with the normal teenage boy issues as well as those of a vampire, making his character and subsequent dialogue quiet interesting. The author’s use of the mundane and ordinary with plenty of twists to the plot ensure that the story flows along at a nice pace with plenty of surprises to keep things fresh.

This is a great book in a great series; I only hope that once Vlad finishes high school that Brewer won’t stop his journey.
Posted by Scott Wilson at 6:14 PM