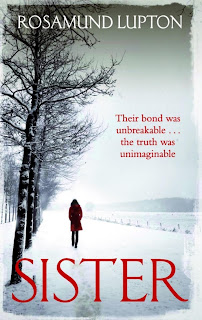 What would you do if your sister disappeared without a trace? This is an emotionally fraught and at some times terrifying story about two sisters and the strength that binds them.

My sister would never have killed herself...' When Beatrice hears that her little sister, Tess, is missing, she returns home to London on the first flight available. But Bee is unprepared for the terrifying truths she must face about her younger sibling when Tess s broken body is discovered in the snow. The police, Bee s friends, her fiancé and even her mother accept the fact that Tess committed suicide. But nobody knows a sister like a sister, and Bee is convinced that something more sinister is responsible for Tess s untimely death. So she embarks on a dangerous journey to discover the truth, no matter the cost...

For years Rosamund Lupton has been a script writer for the BBC. She lives in London with her husband - a doctor - and two children. This is her debut novel.

I have been waiting for my copy of this crime-thriller for months as I’d hear some great things about the author and her debut novel. The book was well worth the wait and the reviews I’d heard about Sister were all accurate, with the novel being a well written piece of fiction.

Sister is the story of the unexpected death of a young 21 year-old woman, Tess, and her sister’s attempts to piece together the dead woman's actions and contemplate her state of mind in the days before her death - was it suicide or murder? What makes Sister fascinating reading however is the decision of the author to tell the story not only from the perspective of the dead woman's sister Beatrice, but to do so in the form of an open letter to Tess.

I usually don’t enjoy stories written in the first person and almost never find the diary or letter approach to a novel to be one that I can really get into. Lupton has used both techniques here and done so with a brilliance that will make this book endure time as a great book.

One of the most powerful tools Lupton uses in this novel is the structure tone of the first-person voice. The author creates an element of suspense in a masterful fashion by the brilliant use of the style of writing. This is Rosamund Lupton's first novel but her ability to deliver a well plotted, character driven emotional rollercoaster of a novel is expertly honed.
Posted by Scott Wilson at 7:26 PM