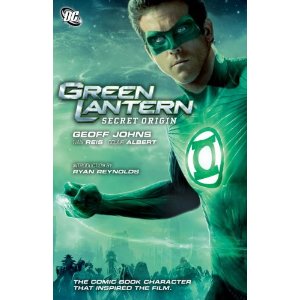 This sensational full colour graphic novel is the perfect jumping-on point for new readers as the buzz builds for the Green Lantern movie! Witness the beginning of the career of the greatest Green Lantern of all as the secret origin of Hal Jordan is revealed. Discover how and why Hal received the Power Ring that changed his life forever. Uncover the mystery of the death of Jordan’s predecessor and find out why Jordan’s mentor Sinestro became obesssed with the prophecy of ‘the Blackest Night’.

Before he became the Green Lantern...before he unwittingly brought about the downfall of the Green Lantern Corps...before his rebirth as the universe's most powerful protector...Hal Jordan of Earth was just a washed-up test pilot with no way to fly...until the dying alien Abin Sur granted him his power ring, the most powerful weapon in the universe--and his entry into a reality he could never have imagined.

Hal Jordan's metamorphosis from cocky test pilot to the role of the intergalactic guardian Green Lantern makes its way to the big screen in June 2011 from Warner Bros. Pictures, directed by Martin Campbell(CASINO ROYALE) and starring Ryan Reynolds and Blake Lively.

In preparation for his roll as Hal Jordan in "Green Lantern", Ryan Reynolds, who also contributes the introduction to this new edition, has pointed to Geoff Johns' GREEN LANTERN: SECRET ORIGIN as "his bible" for shaping his portrayal of Hal Jordan:

Geoff Johns, a Detroit native, brings a Hollywood sense of story-telling to comics. After working as an assistant to Richard Donner (director of Lethal Weapon, Superman and many other great films), Geoff has brought his considerable writing talent to comics. For DC he has written Stars and S.T.R.I.P.E.S., The Flash, Green Lantern and the enormously popular JSA with David Goyer and helped revitalize Hawkman with James Robinson.

As a kid, Green Lantern was one of my favourite superheroes. The power to create anything with the power ring was just mind blowing, and the sort of power that seemed better than anything that any other superhero had. So thirty years later, it is great to see this comic book hero finally receiving recognition and a movie about him.

Green Lantern: Secret Origin is a film tie in with the Ryan Reynold’s movie out later this year. It covers how Hal Jordan became a member of the Corps and gained the power ring. The retelling of the origin does cover some elements that were left to the imagination of the reader in the original comics, which is good because it clears up some questions that long time readers would have about Abin Sur and why he was flying a spaceship when he could have just flown with the power of the ring.

As an added bonus for movie fans, there is an introduction by actor Ryan Reynolds.

The graphics of this new adaptation of Green Lantern is fantastic and will attract new fans to this great character.

Well done to Geoff Johns and Ivan Reis for this brilliant graphic novel.
Posted by Scott Wilson at 12:23 AM