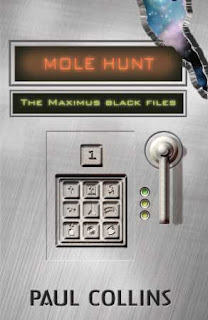 Maximus Black is RIM’s star cadet. But he has a problem. One of RIM’s best agents, Anneke Longshadow, knows there’s a mole in the organisation.

And Maximus has a lot to hide …

“A quirky turn of phrase, combined with a large dose of humour will attract readers who like something extra with their SF” Magpies

“A cross between Total Recall, Dexter and The Girl With the Golden Tattoo” Bookseller + Publisher

“The pace would give Matthew Reilly a nose bleed” Buzz Words

Mole Hunt is a great YA science fiction novel set in a future very different to ours and in a completely different universe. The world has floating cities, people can regenerate at will and human-kind has invented even more ways to torture and kill itself. The main character of this book is eighteen year old Maximus Black, who works for galactic law enforcement agency, RIM.

Black is a highly-trained killing machine and a sociopathic psychopath. Given that he saw his parents murdered when he was only six, it is not that hard to understand why he has issues. While Black works for a law enforcement agency, he has made it his personal quest to exact revenge on the galaxy for the wrongs done to him.

The story is written from the viewpoint that alternates between Black and Longshadow, making the pace and story quite fast and interesting. While aimed at the YA audience, this book was quite a good read for an adult. Look forward to the next book in the series.

Check out an interview with Paul here  http://www.youtube.com/watch?v=3S-eKDYqpEs
Posted by Scott Wilson at 1:54 AM