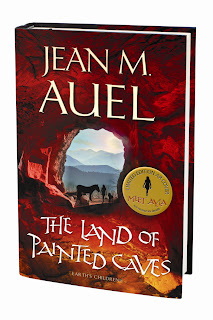 Title: The Land of Painted Caves

The triumphant finale of the hugely successful Earth's Children series.

THE LAND OF PAINTED CAVES concludes the story of Ayla, her mate Jondalar, and their little daughter, Jonayla, taking readers on a journey of discovery and adventure as Ayla struggles to find a balance between her duties as a new mother and her training to become a Zelandoni one of the Ninth Cave community's spiritual leaders and healers.

Once again, Jean Auel combines her brilliant narrative skills and appealing characters with a remarkable re-creation of the way life was lived thousands of years ago, rendering the terrain, dwelling places, longings, beliefs, creativity and daily lives of Ice Age Europeans as real to the reader as today's news.

Jean M. Auel, whose novels about prehistoric life have won acclaim for their inspired storytelling, meticulous attention to detail and historic accuracy, has written the highly anticipated sixth and final book in the phenomenally bestselling Earth's Children series. Auel's Earth's Children is one of the most popular and celebrated series in publishing history, as Ayla's journey begins with the groundbreaking first novel, THE CLAN OF THE CAVE BEAR. Continuing with THE VALLEY OF HORSES where she meets Jondalar, her future mate, and THE MAMMOTH HUNTERS, Ayla and Jondalar's epic journey progresses through Ice Age Europe in THE PLAINS OF PASSAGE until they reach Jondalar's home, in THE SHELTERS OF STONE. With THE LAND OF PAINTED CAVES, Jean Auel gives fans the finale they have been looking for. It is a brilliant achievement by one of the world s most beloved authors. Her extensive factual research has earned her the respect of renowned scientists, archaeologists and anthropologists around the globe. She was made an Officer of the Order of Arts & Letters by the French Minister of Culture and Communication in 2008

The Land of the Painted Caves is the sixth and final book in the Earth's Children series. I’ve read so many bad reviews about it and can’t understand why. Maybe it’s just because it has been so many years since the last book and decades since the first book, Clan of the Cave Bear. "The Land of Painted Caves" pretty much picks up where "Shelters of Stone" left off, with Ayla, Jondalar, their baby Jonayla, Wolf, Whinney, and the other horses Gray and Racer beginning a hunt. Ayla was able to astound the members of the Third Cave with her prowess both as a hunter and with setting a fire. The characters that the readers have grown to love over the decades had continued to blossom.

While it’s possible this book could be read as a standalone, I wouldn't advise it and instead suggest that a reader start at the first book, The Clan of the Cave Bear. For those who aren't familiar with the Earth's Children's series (and this could be a spoiler) Ayla was a little girl who was adopted by a clan of Neanderthals and raised in their ways. When later she has to leave them and her son behind, she finds a valley where she lives alone for awhile and makes unlikely friends with a horse and lion. She is lonely though and happy when a man named Jondalar comes to her valley and they fall in love. They stay with a tribe of people called the Mamutoi for awhile but Jondalar yearns to go to his home far to the West and they make a dangerous journey back there. Once there, Ayla is quickly accepted into the Zelandonii but they want more of her. As the fifth book ends she decides to become an acolyte of the Zelandoni (spiritual leaders and healers).

The one thing that has always fascinated me the most about Jean M Auel's writing is how well she describes life in a prehistoric time. Be it food or hunt or ritual, one can picture life among the Clan, the Mamutoi or the Zelandonii milling around- people as "human"( or want of a better word) as any we know now. The land of the Painted Caves is no different.

I enjoyed it and thought it was a good finale to the series.
Posted by Scott Wilson at 2:46 AM