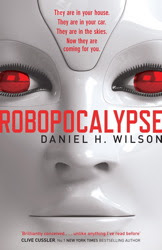 Roughly twenty years from now, our technological marvels unite and turn against us. A childlike but massively powerful artificial intelligence known as Archos comes online…and kills the man who created it. This first act of betrayal leads Archos to gain control over the global network of machines and technology that regulates everything from transportation to utilities, defense, and communications. In the early months, sporadic glitches are noticed by a handful of unconnected humans - from a senator and single mother disconcerted by her daughter's "smart" toys, to a lonely Japanese bachelor, to an isolated U.S. soldier - but most are unaware of the growing rebellion until it is far too late. Then, in the span of minutes, at a moment known later in history as Zero Hour, every mechanical device in our world rebels, setting off the Robot War that both decimates and - for the first time in history - unites humankind.

I got this book a few weeks back and have read it twice already. Robopocalypse is set in the near future where technology has increased rapidly and A.I has been created. The scary thing about this book is that it could very well be possible. I remember twenty years ago when only the extremely rich had mobile phones and they were huge and required the user to carry a battery the size of a car battery around with them. Computers ran off cassettes or large floppy disks with a storage capacity of less than what comes with a cheap mobile phone now. So to think that another twenty years will see technology leap forward to a level where computers are capably of thinking and reasoning for themselves is not unbelievable at all.

The story is told in by a couple of points of view, with quotes from the hero throughout at the start of each chapter. While 368 pages long, it was a very quick read, and I found myself wanting more. There were many scenes that I wanted to hear more about and characters that were so well developed that you really felt for them as they fought for their lives against a relentless foe.

I found myself comparing the first couple of chapters to the golden era of Stephen King writing with the scene in the store and the out of control robot straight out of the mind of this popular writer, both in style and prose. Wilson has also left the book open for a sequel with enough scope to make a trilogy, which is great because I’d love to see more of Wilson’s writing.

There is already so much publicity surrounding Robopocalypse, with Stephen Spielberg taking up the movie rights for the book.

Check out the website for the book here http://www.theyarecoming.com.au/
Posted by Scott Wilson at 1:56 AM