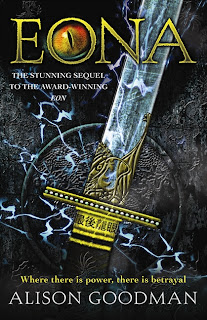 Once she was Eon, a girl disguised as a boy, risking her life for the chance to become a Dragoneye apprentice. Now she is Eona, thrust into the role of her country′s saviour.

But Eona has an even more dangerous secret - she cannot control her power. When she tries to bond with her Mirror Dragon, the anguish of the ten spirit beasts whose Dragoneyes were murdered surges through her. The result: a killing force that destroys everything before it.

On the run from High Lord Sethon′s army, Eona and her friends must help the Pearl Emperor, Kygo, wrest back his throne. Everyone is relying on Eona′s power. Can she face her own darkness within, and drive a desperate bargain with an old enemy? A wrong move could obliterate them all.

Against a thrilling backdrop of explosive combat, ruthless power struggles and exotic lore, Eona is the gripping story of a remarkable warrior who must find the strength to walk a deadly line between truth and justice.

Eona is the sequal to Alison Goodman’s book Eon and a much better read than the first book in the series. With Eon, much of the novel was taken up with setting the scene for the adventure to take place. Now that all of those details are out of the way, Goodman has crafted an action packed fantasy in Eona where Eona is on a quest to save her home country and learn how to control her new powers.

To the shock of everyone Eon the novice proves to be a female; the first dragoneye of that gender in centuries. The ten other dragoneye except Eona and Lord Ido were massacred after being betrayed by the latter. No longer concealing her sex, Eona struggles with the grief of the Celestial Dragons and remains loyal to the deposed Pearl Emperor Kygo; removed from the throne by his uncle High Lord Sefton.

While Eona flees accompanied by rebels Ryko and Lady Dela in search of the stolen Black Folio, Lord Sefton sends his army to kill one of the two threats remaining to his rule. He also incarcerates Ido before the last experienced dragoneye can use his power. Eona reluctantly needs to rescue the traitor so he can mentor her on using her power to protect Kygo who she loves while wanting Ido.

The second Empire of the Celestial Dragons (see Eon) is a fabulous quest fantasy. Eona is terrific heroine struggling to learn her craft ironically from the traitor who betrayed and destroyed his peers. The tale is filled with angst as the dragons are grieving over the loss of their bonded partner; while Eona feels the weight of the world on her shoulders as she tries to help the mourners and the exiled young Emperor Kygo, but does not know how.
Posted by Scott Wilson at 2:20 AM