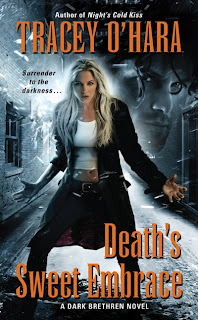 After centuries of secret conflict, humans and parahumans have reached an uneasy truce. But unspeakable evil now threatens the tenuous peace.

Teenaged shapeshifters are being slaughtered by a sadistic serial killer who rips their still-beating hearts from their paralyzed bodies. A task force forms to halt the madness, including the vampiric Aeternus Antoinette Petrescu, as well as Kitt Jordan and Raven Matokwe, members of enemy Animalian tribes . . . and forbidden lovers.

A centuries-old blood feud has divided their shapeshifting peoples, and if their passion is discovered it will doom them both. But past hostilities must be put aside, for the killer they seek is but the first sign of the all-consuming nightmare of The Dark Brethren.

Death’s Sweet Embrace is the second Dark Brethren urban fantasy, following on from Night's Cold Kiss, and retaining the foreboding atmosphere even with a romantic subplot of a darkened world in which sentient species battled for over a century to be at the top of the food chain. The prime plot is a desperate investigation to end the reign of terror of a serial killer. Vivid, don't eat while reading Death's Sweet embrace as sweet is not quite the adjective to describe this dark thriller.

Book two in the series is Kitt’s story. Kitt is an Animalian (shifter), widow and mother of two who lives alone. She was kicked out of her pride and her children were taken from her and raised by the very pride which disowned her. During this same time a bounty was placed on her lover Raven because Kitt’s pride believed he had something to do with the death of Kitt’s husband

A fascinating read a very strong urban fantasy with dark undertones...If you like this type of genre you won't be disappointed.
Posted by Scott Wilson at 2:32 AM