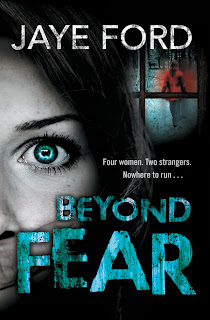 An adrenaline-pumping suspense thriller from an extraordinary new talent.

At seventeen, Jodie Cramer survived a terrifying assault at the hands of three strangers. Her schoolmate Angie was not so lucky . . .

Now thirty-five, Jodie is a teacher and mother of two - and her past is a horror she’s buried deep. When she sets out for a weekend in the country with three friends, all she has in mind are a few laughs and a break from routine.

However, unknown to the four women, their secluded cabin was once the focus of a police investigation and, like Jodie, holds a very dark secret . . .

When Jodie finds evidence of prowlers at the cabin, she is convinced they are being watched, though none of her friends believe her. And after suffering flashbacks to the night of Angie's murder, she also starts to doubt her own sanity.

Until two men come knocking at their door.

Debut novel from Jaye Ford, a former journalist who lives in Lake Macquarie, NSW. The story of 4 women who have a girly weekend once a year, filled with laughter, fun, champagne, food and much more. But this year, things don't quite work out the way they planned!!! Jodie, who has a tragedy almost 20 years in her past, of which she has told no-one, Corrine, Hannah and Louise find their weekend starting badly with a car accident on a country road heading for the B&B at Bald Hill. Before the women even reach the town of Bald Hill things go wrong. They're run off the road, left in the dark in the middle of nowhere and then Jodie has an encounter with a creepy bloke in the pub who, we learn, from another viewpoint character Matt, is suspected of killing a girl. I loved this book for many reasons, most of all because it is essentially a simple mystery tale. No complex forensic procedures, no grizzly murder scenes... Just a handful of complex characters, and an isolated barn in the middle of the night. It was a genuinely creepy read because you can put yourself completely in the position of Jodie.

Eventually settled and relaxing, the isolation begins to cause Jodie to have 'flashbacks' to her past. She senses trouble, but no-one will believe her, until two men come knocking.

If you're a fan of good crime and old-fashioned mysteries, I have no doubt you will love this book. It's strongest point is in its simplicity, and I will eagerly await Ford's next novel.
Posted by Scott Wilson at 1:47 AM