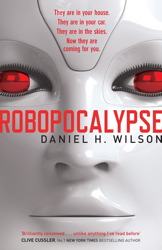 Scott: Thank you so much taking the time to chat with us here at The Fringe magazine. I’ve recently finished reading your latest novel Robopocalypse and thoroughly enjoyed it. How has it been received it the market to date?
Daniel: The response has been overwhelmingly positive, which is a good thing. I love writing and thinking about technology and robots – so if I wasn’t writing stuff like Robopocalypse, I wouldn’t be writing. Thank goodness people are interested in robots.
Scott: How did the interest by Steven Spielberg come about in making Robopocalypse into a movie? Without it even being published and Spielberg buying the film rights is pretty amazing.

Daniel: An executive at DreamWorks had the sample pages sent to her by a scout. She knew that Steven was interested in robots, and she sent them on. He made the call to purchase the rights immediately and preemptively, before news of its existence could spread. Basically, the people at DreamWorks had their eyes on the ball in what is a very competitive environment. 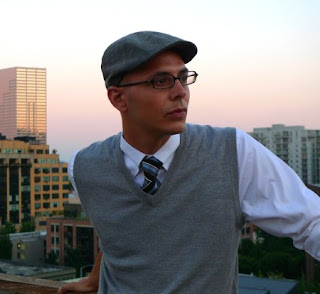 Scott: Can you tell us about the website for the book, whose idea was it and how much involvement did you have in the content?

Daniel: The awesome marketing folks at Doubleday were in charge of making the website (www.ArchosR14.com). I knew I was in good hands when I saw that they had included the “R-14” in the name, which indicates that thirteen other super-intelligent AIs were created and destroyed already. Such a small detail, but chilling. I wasn’t involved in making the website, but I did vet the information included in the “Identification and Neutralization of Robotic Combatants” field manual.*

Daniel: A typical day absolutely exists -- getting into a pattern and tricking yourself into feeling like you are going to work is crucial. I usually write a few hours in the morning with a cup of coffee, and then I futz around with plotting and answering emails and research in the afternoon. Minimum is 500 words, but sometimes I’ll belt out 2,500 or so. I write quick and never look back because editing is my favorite part of the process. Anything to kill that blank page.

Daniel: I wrote six non-fiction books before I tried to sell fiction. Once I decided to do fiction (which I had always planned to do), I wrote a short story called “The Nostalgist” and sold it to Liz Gorinsky at Tor.com. (It’s available to read online, just search for it.) Next, I converted a children’s book I’d been hired to write into a full on middle reader novel. That was my real schooling, since I had to rewrite the book about three times. “A Boy and His Bot” was released January 2011. “Robopocalypse” was sold on a 100 page sample, but I was finally ready and it was the book I was born to write.

Daniel: I think of the most incredible scenes that I can and then I write them first. Those key moments define the story and I know they have to be there. To some extent, the rest of the story is interpolated around those moments that are in my head. I’m pretty methodical about having a good blueprint up front, before I start writing. But sometimes things take a turn, and I’ll go with it if it feels right. Lots of times there is some great tweak that stares you in the face for a whole draft until you slap yourself on the forehead and say, “Oh! Now I get what I’ve been trying to do!”

Daniel: I’m a random reader – my research mixes with pleasure. On my desk right now is “Ready Player One,” by Ernie Cline; “The Devil All the Time,” by Don Pollack; “RV Vacations for Dummies,” “The Once and Future King,” and “Behind Bars: Surviving Prison.”

Most of my substantive reading was done when I was younger, and my five favorite books reflect that. Don’t hold me to this list, but off the top of my head I absolutely loved: “Sea of Glass,” by Barry Longyear; “Ender’s Game,” by Orson Scott Card; “Jonathan Strange & Mr. Norrell,” by Susanna Clark; “Dune,” by Frank Herbert; and “Cryptonomicon,” by Neal Stephenson.

Scott: Can we expect a sequel to Robopocalypse? The ending has left if open to the possibility of another book or two.

Daniel: A sequel hasn’t been discussed, although the book does continue in my head. If there is a demand, I’d love to continue telling the story. I’m writing another techno-thriller right now (with the rights sold to Summit, and Alex Proyas tentatively attached to direct) called AMP. It’s about a near-term future human rights struggle for people who have incorporated technology into their bodies.

Scott: I haven’t read your previous non-fiction book, How to Survive a Robot Uprising, yet, but am looking for a copy now. Can you tell us a bit about that book?

Daniel: While I was in graduate school studying robotics, I got pissed off that robots were always portrayed as bad guys in the movies. To make fun of that, I went around and asked all my colleagues how they would escape should their robots choose to attack. The real-world advice went into “How to Survive a Robot Uprising,” which is actually often used as a primer for first-year robotics courses. And, well, I’m aware of the irony given what I’ve been writing lately.