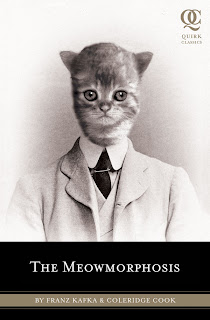 One morning, as Gregor Samsa was waking up from anxious dreams, he discovered that he had been changed into an adorable kitten

Gregor Samsa is a humble young man who supports his unemployed parents and teenage sister by working as a traveling fabric salesman. But his life goes strangely wrong in the very first sentence of The Meowmorphosis, when he wakes up late for work and discovers that he has inexplicably become an adorable kitten. His family must admit that, yes, their son is now OMG so cute—but what good is cute when there are bills to pay? How can Gregor be so selfish as to devote his attention to a ball of yarn? And how dare he jump out the bedroom window to wander through Kafka’s literary landscape? Never before has a cat’s tale been so poignant, strange, and horrifyingly funny.

The Meowmorphosis is the latest from Quirk's hugely successful line of mash-ups of classics, this one penned by a fantasy writer writing under a pseudonym. This one is a gutsier step than some of the previous mash-ups: no staid Austen here. This time, we're doing the Kafkaesque as Kittenesque, which is a whole new liteary territory (modernism) taken to a whole new level of surreal.

While the initial chapters stick close to Kafka's well-known novella, the book spirals out of control (in a good way) when Samsa leaves his parents' home to relieve them of the burden of caring and feeding for such a large, adorable kitten. Samsa's adventure is both hilarious and horrifying to witness, and takes meta-fiction to dizzying new heights. The new co-writer absolutely nails Kafka's voice; the new passages integrate so well with the story that it's hard to believe the book isn't entirely written by one author.

This book is the best of the mash-ups to date.
Posted by Scott Wilson at 1:39 AM